evil on film. watch it. you will need a strong stomach.
The discussion and reporting of the Polish Air Crash in the media has been minimal and lamentable. Only Saakashvilli of Georgia on CNN has talked openly of the crash being ‘an evil act’. All others meekly go along with Russian explanations, despite the lack of any concrete evidence.

The crash site was said to be a mile from Smolensk’s airport, yet aerial pictures show it crashed on the perimeter of the airfield. The destruction of the plane was total, and not consistent with a landing that went wrong. Three Russian boys nearby heard an explosion before the crash.

The Russian resurgence, which began with the invasion of Georgia, is continuing to overpower Ukraine by political means, and Putin is now clearly looking to make waves further East. Anyone who doubts the evil of which Putin is capable, need only watch the video shot of ordinary Russian prisoners being beaten and tortured to see that here is a man capable of virtually any brutality. The murder of Litvinenko also suggests that Putin is a ruthless operator who doesn’t have peace in his heart.

The Russian armed forces are being vastly increased in size. Russian flights are invading British airspace and interceptions having to be flown from RAF Leuchars on a regular basis.

The EU has been penetrated by Russian agents at the highest level, according to Litvinenko, with Romano Prodi being an FSB agent, the former head of the EU Commission.

Putin has compromised the politics of Kazakhstan, and the Baltic States. At the same time, the Russian economy is in a state of near collapse with corruption overpowering all efforts at the building of a normal economy.

Russian friends of mine, who once had good businesses in Moscow, are asking if they can rent somewhere and come to the UK as it is hopeless to try working in Russia now, and they want to get out.

There are too many signs of serious trouble coming out from Russia, on all levels.

A sudden grab of further territory would not be a surprise. Romania would surely be the next most natural target, after the Crimea is secured, and then the Balkans. No doubt Kosovo would be a target for Putin who is seeking confrontation with a weakened West, to reverse the humiliation that Russia feels from the loss of her former empire. As somebody said, a few years ago, Putin will shock the world. But where will it be? 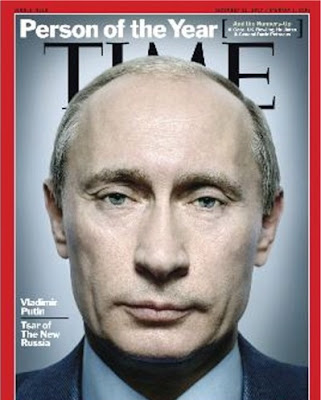 While Europe is completely asleep, Putin can make all his moves unchallenged. He can even murder the President of Poland, one man who could see what Putin is like and was prepared to challenge him, but not even one news channel or serious European politician dares to even mention the fact. It seems as in the battle between good and evil, evil is winning the game, hands down.