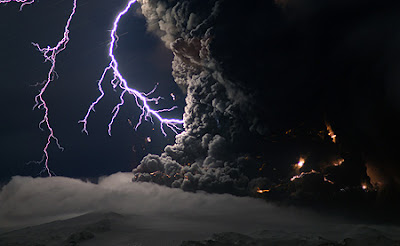 A million Britons are stranded overseas. That’s about 2% of the population. Imagine the dislocation and the costs being incurred by people caught out by this. John Cleese took a taxi from Oslo to Brussels at a cost of $5000, for example. Supply of goods and materials are even worse off than people, with fresh foodstuffs rotting in Africa and other growing regions of the world. Local producers of vegetables will be getting phone calls from Sainsburys and Tescos. Food might start to taste of something once more.

This is serious economic dislocation.

A good report (for once) can be found in The Daily Mirror.

Every cloud has a silver lining. As the volcanic dust intensifies and hangs around in Britain’s skies, more holiday-makers will decide to stay at home. Less buyers will head overseas and more will buy from home-based producers. Shipping companies running ferry services and rail operators will make a fortune, and the skies over London will fall quiet for the first time in sixty years. Oh joy!

This might help Boris Johnson’s campaign for London’s next airport to be built out of reclaimed land in the Thames Estuary away from human populations and able to take flights 24 hours a day without polluting and ruining the peace and quiet of West London.

There might soon be shipping services opening up from British ports to all corners of the earth. A new age of sea travel could be about to break out. Never mind cruising. Sea travel would become our lifeline and connection to the world once more. Conferencing facilities onboard and fast internet links to bring it all up to date.

This is the kind of thing to get ship-owners thinking.

(If people will pay to cruise nowhere in particular, there must be a demand for sea travel, combining purpose with pleasure and restfulness).

Daily Mirror
There was anger when ferry firm P&O hiked up the price for foot passengers from £10 to £50 – then announced there was no more space.
There will be an armada of little ships in a week’s time, all competing to move 100’s of 1000’s of people. The Dunkirk spirit will be back. A new age of enterprise born out of crisis, will raise the spirit of nation, not seen since the Second World War. Maybe the will to survive as a democracy, and drive back the totalitarian bureaucracies of Brussels and Moscow will grow out of it. Ships are us.

Yahoo writes – In Britain, leaders made contingency plans to bring people home. Prime Minister Gordon Brown said the aircraft carrier HMS Ark Royal and assault ship HMS Ocean would be sent across the English Channel. A third ship is being sent to Spain to pick up soldiers trying to get back to Britain after a tour of duty in Afghanistan.

“I expect Ocean to be in the Channel today. I expect the Ark Royal to moving towards the Channel later,” Brown said after a meeting of the government’s emergency committee, known as COBRA.

He said Britain was speaking with Spanish authorities to see whether Britons stranded overseas could be flown there and then taken home by boat or bus.

(A former Ark Royal was under my grandfather’s command during WW2, when its tiny planes were sent to torpedo The Bismark. It was part of The Second Cruiser Squadron)