I flew out of Manchester on the 13th April 2010, one day short of the onset of volcanic disruption of flights. My return date is booked a month ahead. But will I be able to return from Tokyo by air I wonder?

There is no end to the current disruption in sight. According to historical records, the volcano has erupted every two hundred years or so, and when it erupts, the event usually lasts for more than a year. The last eruption in 1821 was in any case followed two years later by an eruption of the neighboring volcano in 1823.

I do hope this means an end to air travel in Europe. No seriously, it would be great to get back to moving around by ship. Air travel is so dull, but there is no alternative. Maybe this will bring back the days of sea travel, and we can all take longer time to get around. Life needs to slow down. Here is our chance. Once people are used to travelling by boat, many will prefer not to get back in the air. The holiday can starts from the docks, and entertainment of all kinds can be provided while people float to their destinations.

Three previous eruptions of Eyjafjallajökull are known in the last 1100 years (historical time in Iceland). The most recent began in December 1821 and lasted intermittently for more than a year. The neighbouring volcano Katla erupted then on 26 June 1823. Other eruptions include an eruption in 1612 or 1613, and about 920 A.D. 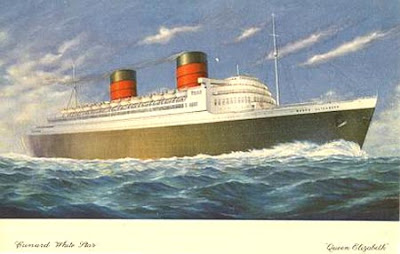 I wonder how long it will be before cruisers are offering transatlantic sailings. A week from now if the price is right, I would imagine, with demand stratospheric. I’ll head home via New York if they do.

We are told the ash cloud is too dangerous to allow any plane to fly through it, so it is best to ground all jet planes.A review would ask

1. Is there any way of flying or protecting the engines so that the dust is not lethal?
2. Are there corridors to the west that would allow contact again with the Americas and Asia via the western routes?
3. Could planes take off from say Bristol and Liverpool, fly out low over the sea far enough to be free from the overhead dust and then climb to a more fuel efficient altitude?
4. Are there staging airports in the Atlantic area they could use to refuel if they have to fly low for any distance?
5. What action is being taken to improve capacity on road and rail ferry routes in all directions to the continent?
6. What do the latest tests show about plane stamina and ability to fly round the obstacles?
7. What actions are other countries taking to allow some flights?
8. Should there be any queue or rationing system imposed if we remain artifically very short of capacity for any length of time? Are there for example priority goods that need to be flown in first?

There are doubtless many other questions experts could raise. The need surely is to get some lateral thinking on how we can get the UK on the move again. This is one time when it does need a government to ask the questions and co-ordinate the response, as it is a branch of government, the air space regulators, who are saying no-one and nothing can fly anywhere for the forseeable future.

Have the authorities overreacted, as KLM successfully carry out test flights through a ‘gap’ in the atmospheric volcanic ash?

as The Shanghai Daily wonders.