Reading the pages of the financial news, you would be forgiven for imagining the dawn of a new golden age was breaking. The Dow Jones hits a new high each week. Optimism is back in vogue. All memories of the recent Lehman and Bear Stearns collapses, and subprime defaults are missing from the front pages.

This is a grand delusion, being encouraged by political leaders, aware that any collapse in confidence threatens their tenure. The EU tries each week to persuade the world that the Greek crisis is dealt with, and yet every time they declare it’s over, the crisis finds a way to come back at them. The bail-out came and went and yet the crippling rates at which Greece must borrow are exactly the same as before. Whatever they try to do, Greek insolvency is not going away. The problem is simply too vast in scale and entrenched. Only exit from the Euro will be the start of a long and painful solution (but don’t tell anyone, OK).

Obama squeezed through his health reforms by the tiniest of margins, but interestingly there is nothing about the specific proposals which cannot be reversed later. There was no structural redesign of health provision, with private hospitals closing in favour of a federal-run health bureaucracy. There was merely a tinkering with the methods of payment. The real story, as everyone knows is that spending more money is all an illusion. There is none left to spend.

Not only are EU member nations in a state of collapse with Greek public sector workers still waiting for their January pay cheques. In the USA, state governments and municipalities are in financial crisis too. The USA’s Greece is California, the one that everyone knows about, but just as in Europe there are many more Greeces to come, so too in the US, there are plenty of Californias yet to hit the headlines.

Mortgage defaults in the US are forecast by real estate agents to hit 500,000 a year nationally in 2010, as even creditworthy home-owners decide to walk away as their homes crash in value. The bottom of the market is nowhere in sight even after two years of falls.

Just this morning, this email hit my in-tray, itemising some of the cutbacks in service being trailed, and actually happening in the US.

Prisoners are being let loose on the streets.

Students have been forced to go to a 4-day school week.

The Sheriff’s department has been dissolved.

The library’s doors have been shut permanently.

The firefighting squad has been disbanded.

Quick quiz: Am I describing the rapid deterioration of some third world country, or is this a far-fetched doomsday scenario that may happen someday here in the U.S.?

Shockingly, what I just described to you is just a small sample of what’s happening RIGHT NOW, beneath our noses, in communities all across the U.S.

Cities and states across the U.S. are getting absolutely whacked — Greek style — as their tax revenues plummet and their benefit obligations skyrocket.

It can only be a question of time before the financial realities of $18 trillion public sector debt in the USA and a similar figure of public debt across the EU starts to bite on the frothy confidence of the world’s stock markets, and delusional journalistic optimism.

The powerful state bureaucracies that want to control our every thought and act, are already living on borrowed time. As they crash and burn, they are trying to push their distress onto the populations who they failed to serve while they borrowed to destruction, and lined their own pockets. In this mess of gigantic proportions unprecendented throughout history, political leadership is going to change.

Central control will never be trusted again by a generation brought up to believe in its all encompassing provision. Secret state programmes will be outed, like those involving the monitoring and seizure of our children for systematic programmes of child rape, and the state-sponsored creation of a billion dollar child porn industry selling images and videos on the internet. The silence of these programmes where children like Madeleine McCann can simply be made to disappear and no government will do anything to stop it, will surely be smashed. This is one state service we could have done without all along.

Children need local protection by their communities, not from a centralised bureaucracy and court system penetrated by paedophiles. Central and regional government must never again be allowed to reign supreme, and be in control of all media directing propaganda of their success and glory, while they clean us out, rape our children and smash our economies.

Happy Easter 2010, and in Britain, a hearty welcome to David Cameron, and his trailed programme of localism. 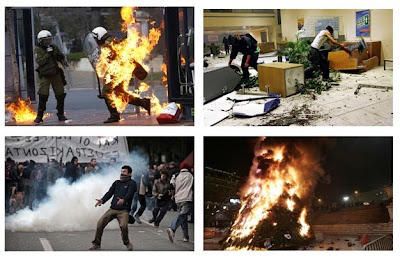 THE CONSEQUENCES OF STATE INSOLVENCY – Pictures of recent rioting in Greece.

Information about what is really going on will not be found in the MSM. Blogs get there first these days.

OT – just a wee anecdote on Greece, my best friend’s hubby is Greek and, due to him being terminally ill, she’s been talking to the family in Athens quite a bit these last few days. Apparently the ones that work in the public sector, mostly health, haven’t been paid since early January. No wonder they are out on the streets.