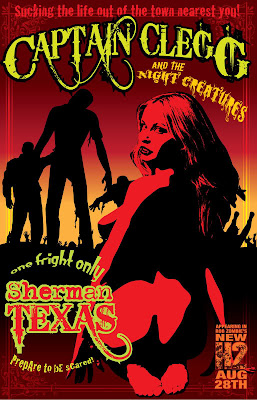 There is much speculation in the media about the new pin-up boy of British politics – Nick Clegg. In a debate seen by only one quarter of British voters, apparently 100% of those who viewed the debate decided to instantly change their political allegiances formed over a lifetime, and follow this new Pied Piper, casting out the rats from City Hall.

But while David Cameron reads the newspapers and watches the news channels, he must realise that this is a similar MSM narrative to the one that surged his campaign to win the Conservative leadership, when it was still believed that he was a europhile, and would be the next Blair, willing to sell out his country and his party to the EU. That was before he announced his intention to hold referendums on any further transfer of powers, and to negotiate for repatriation of powers. From that moment the media has decided that Cameron has to be stopped, and his polling lead has been gradually reduced from its position of 28% in 2008, to the current 3 to 5%.

With Brown’s support withering, Captain Clegg has been selected to act the role of Britain’s number one traitor instead, and the media are carrying out the annointing of the new europhile saint.

All the Conservatives need to do is stick to the knitting. There is well-proven and road-tested way to slow up Lib Dem surges. This is how it goes.

The best counterattack against the Lib Dems is always to use the John Redwood method. He realised that Lib Dem voters have no idea what Liberal Democrat policies are. Once they find out, most no longer want to vote Lib Dem. Publish Lib Dem policies, Conservatives, is all you need to do.

I’ve seen hints of this approach being the key reply to come from Cameron and Osborne. This would be better than reaching for the immigration card, which is, rightly or wrongly, associated with extremism. Lib Dems are keen to promote vapidity for example, along with public acceptance of gay and paedophile sexual orientation in schools (The Lib Dem-approved Lisbon Treaty legitimises paedophilia).

Captain Clegg is a Liberal Democrat Jekyll and Hyde classic. The movie’s PR is the only good thing about it. Characterisation is thin. Cameron needs to expose that combined with its implausible plot.

As has been nicely done here in the News Of The World. 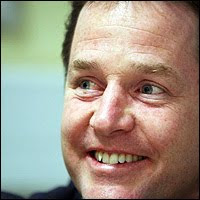 Captain Clegg. His appetite for multiple conflicting policies is matched only his consumption of large numbers of adoring women.

EXTRACT – IN THEIR desperation for votes this General Election, the Liberal Democrats are willing to say absolutely ANYTHING to get your vote.
For an exclusive News of the World investigation we have trawled the length and breadth of the country, examining the millions of leaflets being shoved through your doors by Lib Dem, volunteers.

We have also tracked down the promises their senior politicians have been coming out with when they think no-one is listening.

On some of the most crucial issues that will help voters decide who to back at the next election they are trying to be all things to all people.

Yes, NOTW. That’s our Captain Clegg alright! You have been warned, girls. Watch out before he sucks the life out of the town nearest you…..

Yesterday, Mr Clegg told the News of the World: “I really welcome any scrutiny of our polcies on a national or a local level.

I’ve always said this campaign should be about policies and ideas.

THE TAP – Yes, Captain. You welcome scrutiny of national or local policies but not both at the same time. Understood.

What’s your favourite Lib Dem non-policy? These are Heather’s from Political Betting comments this evening –

I am a lurker on this site and have voted Tory all my life and not about to change. I had conversations over the weekend with my 34 yr old son who thought Clegg`s idea of shipping workers into certain areas was bonkers. My older sister-in-law agreed with me that Clegg`s hand in pocket approach was awful and my card carrying public sector labour voting sister-in-law was about to vote Tory. I also noticed that the leaflet from out local Lib Dem was all Tory policies, extra midwives etc.

and Dave from Billericay –

its not those policies. Its the pro eu, joining the euro, scrapping the deterrent, pension raid. road pricing, 100% carbon free electricity. no nuclear power one that worry me and how the hell are we ment to afford it and balance the books ?

AND A WORD FROM A LONDON CONSERVATIVE CANVASSER

I have no idea whether these polls are right or wrong but what I can say is that I have spent the weekend canvassing a three-way marginal in N London where the LDs claim to be winning.

We thought there might be quite a big shift towards them this weekend given the polls. This hasn’t been our experience and they are still way down on our polling figures apart from in one ward where they have consistently been very strong. The Lab vote is solid as is the Con vote and out of all the people I spoke to this weekend only one has told me they are switching to LDs as a result of the debate.

Could it be that these are the people who are skewing the polls?

“In the same opinion poll, barely half those asked said they knew what Mr Clegg stood for.And quizzed on the top ten plans put forward by his party, six of them were given a resounding thumbs down. They were Mr Clegg’s proposals on an illegal immigrant amnesty, community service instead of jail for criminals, upping taxes to scrap tuition fees, giving more powers to Brussels, joining the Euro and halting nuclear power stations.”

Here’s the graphic from the paper showing the poll results. 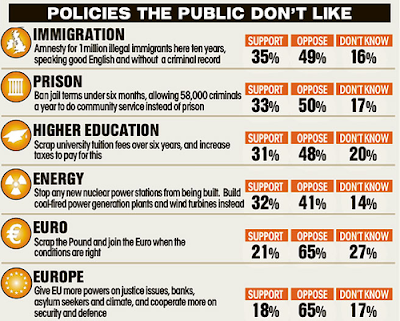