These pictures come from a Russian professional pilot’s website, (provided from a commenter whose wife speaks Polish), and answer some questions about the crash while leaving others unanswered. The trees in the plane’s flight path leave a pathway of lopped off branches, the one below showing that the plane had banked to almost 90 degrees to the ground trying to avoid impact.

From the flight path picture above, the green line shows the correct approach to Smolensk airport. For some reason the plane descended on a steeper line and headed into a depression. The pilot realised his error and tried to regain altitude, but before he could do so, he began to hit a series of trees, which were in his way as he climbed up and out of the depression.

The plane was clearly not shot down. And the pilot and passengers clearly endured a white-knuckle ride lasting several seconds, before meeting their deaths.

But why did the pilot descend at a steeper angle than he should have done, and get into the depression in the first place?

Once he was fighting to clear trees it appears he lost part of his port-side wing, which fatally compromised the flight.

Did Air Traffic Control advise him of his incorrect descent, or did they give him the course he took, wrongly stating his position?

He must have been confused as to his exact position for some reason. Without clear visibility, and without electronic landing facilities at Smolensk, he depended completely on Air Traffic Control to tell him his position and give him his angle of descent.

What went wrong? That question has still not been answered.

The two flight data recorders are well preserved and have been fully examined – the Russian-made one, by a lab in Moscow, and the Polish-made one, by its makers in Poland. The work on the voice box is to continue in Moscow in cooperation with Polish engineers. On the coming Tuesday, the Polish side of the crash probe will unveil its findings at a Warsaw news conference.

So we will hear a detailed professional Polish report next Tuesday. The plane had escaped the depression and was climbing free, when it suddenly fell to earth. Damage from the trees probably had made the plane unairworthy.

Key questions would be –

‘Did air traffic control wrongly identify the plane’s position to the plane?’

If the plane’s voice recorder is damaged, what do the tapes from Smolensk air traffic control reveal about the conversations with the flight?

What course and speeds did the air traffic controllers give to the plane before it crashed?

Had part of the port-side wing fallen away after impacting a larger tree, making the plane unairworthy, causing it to fall from the sky at a speed which explains the violent nature of the impact with the ground?

In the graphic of the plane’s last moments, the broken wing appears to have changed sides, from port to starboard. From the crash site pictures, it would be possible that the plane was upside down when it crashed. 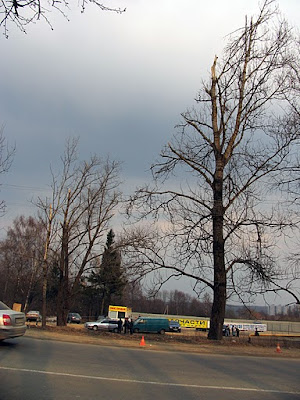