They could have transmitted a signal to disrupt the ILS ( azimuth/glideslope approach). Or just switched off all the nav aids at the airport. There’s a thousand other ways they could have done it. Be interesting if the cockpit voice recorder or ATC tapes ever see the light of day.

My reaction is that foul play is the most likely explanation.

Russia wants Poland buried in the EU, where it has penetrated agents deep into the EU bureaucracy at the highest levels, as Litvinenko revealed before his murder. Kaczynski stood against Federalism, for keeping the Zloty and has allied with Cameron to form a new grouping in the EP.

Poland must regroup and stand separate from the EU, but with Kaczynski’s death, the europhiles could succeed in closing off Polish independence more easily.

Putin is taking personal charge of the crash enquiry. That too is suspicious.

See Baroness Ashton And The Russian Secret Service for some background into other suspicious events which always seem to assist European integration.

UPDATE -James Fallows , The Atlantic – If this were an airport in the US or most of Western Europe, I could quickly look up an approach plate online and see what kind of “precision approaches” were available. The world’s busiest civilian airports often have “Cat III” approaches, which can allow an airplane to land safely (by autopilot) even if the pilots never see the ground at all. I don’t see any listings that show whether the Smolensk airport had instrument-landing procedures of any sort,*** but it is very hard to imagine that it offered Cat III, zero-visibility guidance.

and Over the decades, a wide variety of instrument-approach systems have evolved to get pilots in a position to land even if they have to descend through a layer of clouds or deal with other limits to visibility. But many, many airports around the world have no instrument guidance at all; in theory, you can’t legally (or safely) land there if you can’t see clearly all the way in. I don’t at the moment see any listings of what instrument approaches, if any, applied at this airport.

Yet the plane was allowed to fly in these circumstances. It shows at least a staggering lack of care. Maybe more information as to exactly which airport was involved (there are two possible candidates at Smolensk) and what landing systems it possesses will come to light. 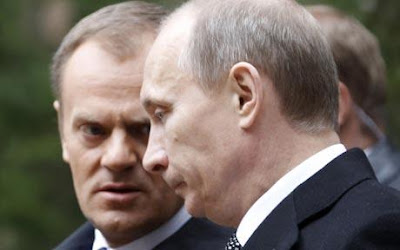 Donald Tusk, Poland’s Prime Minister, met Putin on the 7th April at the Katyn Memorial. He has been frustrated by Kaczynski’s use of the Presidential veto at every turn. Kaczynski was a nationalist, while Tusk is more favourable to integration of Poland into the EU.

Times report – Vladimir Putin, the Russian Prime Minister, had previously paid his respects to the victims – but had stopped short of an apology – in a ceremony on Wednesday with his Polish counterpart, Mr Tusk. But President Kaczynski, distrusted and actively disliked by Russian politicians, had not been invited. The pugnacious 60-year-old was determined to have his own, second memorial service – and died in the attempt.

Xinhua – MOSCOW, April 11 (Xinhua) — Russian and Polish experts on Sunday are checking the flight recorders from the crashed plane, on which Polish President Lech Kaczynski and other senior officials were killed on Saturday, Russian media reported.

Though another report says only two of the four black boxes have been found. here.

BACKGROUND – Vladimir Bukovsky gives his opinion as to what the EU is all about, including Russia’s role in it. here.

4 Responses to “Polish Air Crash. Was It Foul Play?”