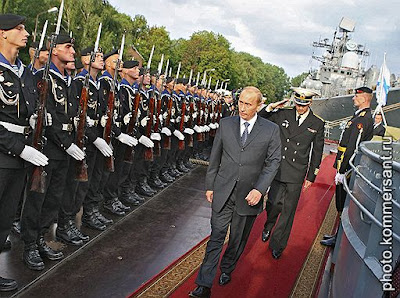 There are still many questions unanswered about the crash which killed Poland’s President Kaczynski. To my mind the suspicions are strong that the plane crash was caused deliberately, and it was part of a coup d’etat in Poland where Prime Minister Tusk wiped out all effective opposition to EU federalism, the Euro, ending Kaczynski’s attempts to build an independent Poland, allied militarily with the USA.

Not many people want to look beyond the media statements given out at the time by all Russian and European media that Kazynski himself caused the crash, despite all the details provided in support of that theory proving to be incorrect. There were the sounds of gunshots recorded at the crash site, which were small calibre, not rapid or random as you would expect from exploding ammunition, but steady and deliberate.

The world does not want to think the unthinkable as yet. Which is foolish in the extreme.

If Russia is complicit in a coup d’etat in Poland, that demonstrates that Russia is potentially a far more serious threat than previously believed. The ‘coup’ happened the next day after Obama signed a Treaty with Putin on reductions in nuclear weapons, which on the face of it seemed reassuring.

It is instructive to return to an article called Energy – The New Cold War written by Liam Fox in The Times in 2007, in which he stated that Russia was unilaterally withdrawing from the Treaty On Conventional Forces in Europe. He wrote the following –

Russia’s petrodollars are financing a $189 billion overhaul of its armed forces between now and 2015. They will purchase more than 1,000 new aircraft and helicopters, 4,000 new tanks and armoured vehicles and a new submarine fleet. New missiles will carry nuclear warheads. Western addiction to oil and gas is causing us to fund the threat against us.

Reports that Russia is now withdrawing from the Conventional Forces in Europe Treaty will only fuel suspicions about Putin’s defence posture.

The Western countries of Europe are living in a dreamworld. Their leaders are locked into a mindset of imagining that the EU is the bringer of peace to Europe, and Russia is neutralised by democracy. Yet the EU is an organisation deeply penetrated by the Russian FSB according to the assassinated Litvinenko, and the Russians are reverting to totalitarianism.

Here is extreme danger. The western countries of Europe disarming, while Russia is rapidly rearming. Liam Fox and David Cameron cannot be unaware of the looming threat, while Clegg seems to be positively advocating immersion into the very political structure, which the Russians are to a greater extent than realised in control of. Brown is a spent force, and is not worth wasting time on.

Britain needs a Conservative government at this time of serious international threat. UKIP should close ranks now, and assist in the defence review that would ensure our armed forces are ready for any threat that is to come from the East.

The Americans and President Obama appear to be less naive as to the threats being faced by the world. LINK to Times article on new worldwide one hour missile.

EXTRACT – White House officials confirmed last week that the president, who won the Nobel peace prize last year, is considering the deployment of a new class of hypersonic guided missiles that can reach their targets at speeds of Mach 5 — about 3,600mph.

That is nearly seven times faster than the 550mph Tomahawk cruise missiles that arrived too late to kill Bin Laden at an Al-Qaeda training camp in Afghanistan in 1998.

“The ability to attack a wide range of targets at intercontinental range, promptly and without resort to nuclear weapons, is of central importance to US national security,” said Daniel Goure, a defence analyst at the Lexington Institute in Virginia.

The White House has requested almost $250m in congressional funding next year for research into hypersonic technologies, some of which harness the shock waves generated by a fast-moving missile to increase its speed further.

The new weapon could be launched from air, land or sea on a long-range missile travelling at suborbital altitudes above 350,000ft. The missile releases a hypersonic pilotless plane that receives updates from satellites as it homes in on its target at up to five times the speed of sound, generating so much heat that it has to be shielded with special materials to avoid melting.