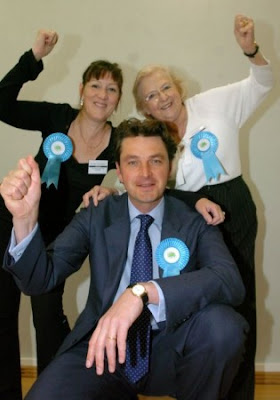 Shrewsbury’s MP 6′ 8″ tall, and eurosceptic, Dan Kawcynski.
I was standing in Shrewsbury town centre on Wyle Cop when a well-known local painter and decorator-cum dance teacher walked by, hooded up to keep off the rain. I only just recognised him as he motored past, and I cried out ‘hello’. He surprised me by turning back and shouting, ‘you were right.’

Call me dumb but I couldn’t think what he was on about, and shouted in turn, ‘about what?’.

Memories go back a while in small towns, and as regulars on this blog might already know, I stood for UKIP in Shrewsbury in the 2001 GE, and had ‘plastered and painted’ the town with the same posters and leaflets mentioned two post previously, which Nigel Farage asked me to distribute nationally for UKIP pre-the 2001 general election. 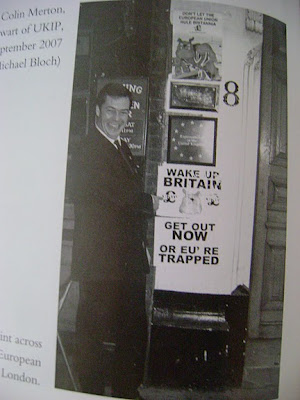 The painter’s tone of voice suggested that maybe at the time he either hadn’t believed me, or he hadn’t been too sure. Nine years on, he has, quite obviously, I am pleased to report, recovered from his former EU-agnosticism.

There are today more signs that Cameron could put up a good fight with the EU if elected.

For example, there can be little doubt as to which side Angela Merkel and the EU are supporting in the coming British general election, and that, my painter friend, will not be David Cameron. Germany’s pro-EU leader has not requested a meeting with him for an age, and this week she snubbed him again. She will be meeting Gordon Brown, but not David Cameron.

He would certainly have accepted the chance to look like a PM-in-waiting and meet up with the German Chancellor, had the opportunity been offered. Eurosceptics might take encouragement that the arch-EU supporter refuses to meet up with David Cameron, and is showing him again the cold Saxon shoulder. Eurosceptics (especially Ukippers like Twig and Robin who frequent comments here) are always sure that Cameron is a sell-out. Yet there is still no certainty either way that Cameron is either pro- or anti- EU. My feelings are that he will become progressively more anti once in power, and follow the opposite path to previous Conservative prime ministers.

Merkel not meeting up with Cameron is another little clue as to the battle for Britain rapidly approaching.

The FT writes – Angela Merkel, the German chancellor, will not be meeting the Conservative leader when she arrives in Britain on Thursday for talks with Mr Brown. Mr Cameron denied he had been snubbed, saying: “She’s offered me a meeting in the next couple of weeks – I don’t know if it’ll be possible to take it up.”

Asked if he was prepared for power, after more than four years as opposition leader, Mr Cameron replied: “I’m ready yes to step up to the plate and do what is of course a daunting job and many daunting challenges but ready to lead in that way, yes.”

I will repeat my eurosceptic’s strategy for 2010, which is very different from the 2001 strategy. In 2001, the EU was not thought of as being of much relevance to politics. The main campaigning problem was to raise its priority up peoples’ list of key issues. Hague had no chance of winning the election, and a UKIP were a way to register a strong protest without affecting the result of the election.

2010 couldn’t be more different. Far more people are now aware that they don’t like the EU, and that it is damaging the quality of our lives, and our economy. Cameron has a very good chance of winning the election, and it would be nuts not to get a large number of eurosceptics in the Conservative Party elected back into Westminster. There was still a sizeable rump of europhiles in the Conservative Parliamentary Party in 2001. In Shrewsbury my Conservative opponent was Anthea MacIntyre who had actually campaigned for the Euro. Most of the well-known europhiles have now gone into retirement.

Today Shrewsbury has a Conservative MP Dan Kawcynski, who is a very different animal.

1. Cameron to win power.
2. Farage into Buckingham.
3. If Cameron fails, a backbench revolt and turf him out.
4. If that fails, Conservatives will finally have no choice but to rally to UKIP.
5. If that fails, a military coup d’etat to re-establish democracy.
6. If that fails, invent a time machine, travel back to 1950 and strangle the EU at birth.