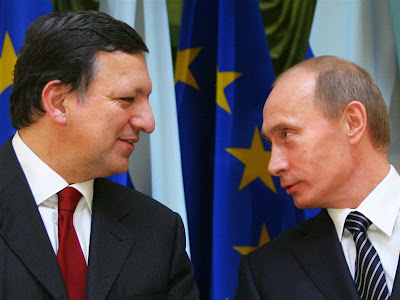 While Vladimir Putin takes personal charge of the Polish air crash investigation, ensuring no professional investigator can control the proceedings, the narrative for news-managing the crash between the EU and Russia is becoming clear.

With little or no evidence provided, the story is being put about that Kaczynski had a habit of instructing pilots to land planes when traffic controllers advised against. This is hardly a professional approach to crash investigation.

It is being alleged that air traffic control advised the plane to move and land at Minsk, yet no recordings have been released. This would not be difficult to do, if this allegation was true.

Another inaccuracy in European and Russian news reports is that they are saying the black box has not revealed any faults in the aircraft’s controls. What is not being admitted is that only two of the four black boxes are being investigated. Two of the four on board the flight were admitted as being ‘not found’ according to Xinhua yesterday. The one showing what the pilots were doing and saying in the minutes before the crash, is not mentioned in any news reports.

Here is the euronews report which runs the current news narrative. Whatever really happened is going to be covered up, and President Kaczynski blamed.

From yesterday – only two out of four black boxes are admitted to being found.

Other reports (BBC) read – Russian investigators suspect pilot error caused Saturday’s crash, in which there were no survivors.
They say the pilots were warned they were flying too low just before the plane clipped tree-tops in heavy fog, as it was coming in to land at an air base.
Russia’s chief investigator, Alexander Bastrykin, said recordings of conversations between the pilots and air traffic controllers revealed no technical problems with the plane.

Why not release the recordings if that would clarify the causes and put suspicions to rest?

Officials have recovered the flight voice recorder, but on Sunday they did not release transcripts of conversations in the cockpit or the control tower.

The longer the release of the transcript, the greater the suspicion will be that it is not genuine. In such a politically sensitive situation, the recordings should have been released immediately.

UPDATE 13th April – An interesting comment below says that another plane full of journalists landed 15 minutes earlier at Smolensk with no trouble.

In this video from ITN shot later in the day amongst the smouldering wreckage, the fog is not that thick. Visibility is reasonable. The trees are small. The plane is completely broken up and spread around a sizeable crash site, which may or may not be consistent with a glide to its destruction. The fuselage is completely destroyed.

If link doesn’t work, here is the full URL http://www.dailymail.co.uk/news/worldnews/article-1265166/Investigation-begins-Lech-Kaczynski-plane-crash.html.

From the link in comments –

25-YEAR-OLD TUPOLEV HAD BEEN ‘OVERHAULED’ IN RUSSIA MONTHS EARLIER
Sunday 11 April 2010 00:30
• UPDATE: OUR SUSPICIONS ARE YET FURTHER STRENGTHENED:
Since we posted this report, we have learned as follows:

(1): President Mikheil Saakashvili of Georgia has stated on a CNN interview that quote ‘something incredibly evil was involved here’ without elaborating or explaining what he was implying. The interview can be seen at this link: http://www.youtube.com/watch?v=ycj2CCkDx3s

(2): A close examination of the precise terrain WEST of the Smolensk-Severnyi military airport reveals that for an extended area, the terrain is DISTINCTLY LOWER than the airport itself, which is situated on a sort of plateau. The area to the WEST of the military airport is between 100 and 150 feet BELOW the plateau. In THAT case, the plane COULD NOT HAVE SCRAPED THE TOPS OF TREES, unless the trees were about 400 feet high.

(3): The investigation is being carried out under the supervision of Prime Minister Vladimir Vladimirovich Putin, a senior GRU (Soviet Military Intelligence) Officer. Since any preplanned sabotage would precisely have been organised by the GRU, the investigation has of course been placed in the hands of the perpetrators, which is standard practice in these cover-up operations, in both the covert Soviet Union and the United States: in case you didn’t know.

(4): An article in The Guardian cites a Polish MP who attended the memorial gathering in the Katyn forests, having travelled there by train, who claims that at the time of the alleged ‘accident’, which occurred just before 11:00 a.m., there were blue skies* over Katyn, which is located about ten miles from the crash site. The Polish MP’s remark is found at the end of the article: here’s the link:
http://www.guardian.co.uk/world/2010/apr/11/poland-president-plane-crash-kaczynski

• See also the following article in the Daily Mail:
http://www.dailymail.co.uk/news/article-1265482/Leck-Kaczynski-Russia-engineered-plane-crash-claims-Polish-MP.html#ixzz0l07Zpee3

The article also shows that three Russian boys heard an explosion before the crash.

11 Responses to “EU And Russia Blame Kaczynski Without Evidence”