One way to look at the changing fortunes of polling is through the eyes of The Elliott Wave. This theory shows that all ‘impulses’ of people in their various social behaviours are subject to ‘çorrections’.

The move back to the situation before the Lib Dem impulse came, as in any statistical calculation of behaviour of any kind, is typically between 40-60%.

If the Lib Dem impulse measures in at 10, taking them from about 20% in the polls pre-impulse to about 30% now, this should therefore correct to between 24% and 26%, if the theory proves to be right in this case. The impulse wave is probably already complete, but there could be another little lengthening of it before it corrects, if some other voters decide to join the surge for some reason.

But then will come a correction.

Pollsters might find that likelihood to vote factors plays a part in these figures, or people reconsider their impulsive behaviour in the cold light of day, or opposition fires up in response. The rationale for a correction is less important according to the Elliott wave theory than its statistical inevitability. An Impulse wave is followed by a Corrective Wave. Period.

The Conservative fall from about 40% to about 32% would also correct, following the same principle. This should be to about the 36% region.

The most likely statistic for the state of the parties’ polling after a correction has occurred, would be about 36:25:25

I make that a Conservative majority outright.

The time required for the impulse to be corrected is maybe enough between now and polling day. Timing is the only factor that might work against this idea.

The impulse was an overnight move caused by the Live TV Debate, and its aftermath, and so the correction might only need a similar period of time to occur. In fact it would play better for the Conservatives not to press hard to encourage such a Correction to happen quickly, but to wait until the wave is ready to budge back the other way, and enhance the move by adding to its weight while it’s in process. Otherwise the correction, if it completes too quickly, might be followed by a second impulse. The key is to time the correction to coincide with the actual election, if they can, and strengthen it.

Between now and the corrective wave, it is best to prepare the ground and see how such an event could most easily occur. It is a natural likelihood that the correction will occur, in need of little artificial intervention, except to the extent that an enhanced effort by the Conservatives to meet this challenge is naturally part of the picture. The trick is to encourage the tendency to correct by as big an amount as possible. 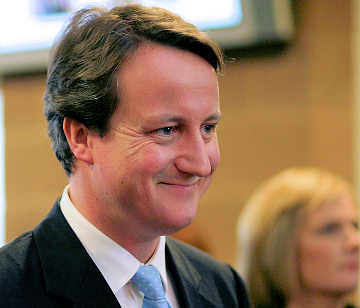 Once the impulse tires, this guy will suddenly seem awfully appealing again. The good thing is that with the impulse at its very maximum point, the Conservatives are still leading, and the game can only move their way from here. Labour are already defeated as their vote is not moving at all in the current wave pattern.