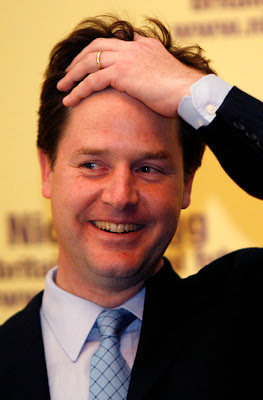 I didn’t watch the TV debates. I’m not in the UK right now but sweating it out on tropical tennis courts in the early hours of the day, shedding the winter lbs which seem to get greater the older I get. The winter was a monster this year, quite the worst for thirty years, and I’m sick of coughing and sneezing away. Not that I need an excuse.

I did, however, read all the reports on the various blogs describing the TV debate between the Party leaders, which are about as partisan as you would expect. Political Betting (run by Lib Dem, Mike Smithson)declared Clegg the outright winner, and then wondered aloud if Clegg might make a surge from here to become the next Prime Minister. It sounded like he was in some kind of ectstatic dream. ”Happy” does not even get close in describing the mood on PB this morning.

Iain Dale (conservative) was a jolly good sport and declared Clegg the winner by a small margin, and thought Cameron didn’t smile as much as he could have done, and certainly not as much as Clegg. Brown, he said, is better not smiling, anyway, as it always looks so false. He was outsmiled by a wide margin by the Lib Dem smiling champ.

I didn’t go and access Labour reports but one can imagine how they would read.

While both these top level commentators expressed their reactions, it occurred to me that not one of them really understood what they were seeing. Do you think Cameron doesn’t know how to smile? Or doesn’t know how to attack the sheer impossibility, and the contradiction of Lib Dem policies? The fact that he didn’t charm or attack but was relatively passive, should have set alarm bells ringing. This is a new strategy, and a damned clever one at that.

Polls show that that is what happened in the hours after the TV debates. Labour dropped into the 20’s and Lib Dem went up to mid 20’s, increasing the Conservative lead to 10%. Cameron is obviously right to leave his smile in his pocket until Polling Day has been and gone. Someone else’s is doing the hard work for him.

FURTHER – from a PB comment I left today Saturday April 18th. Excuse my ignorance, but presumably those who desire to influence the result of the election with postal voting will have already submitted their harvested votes, or will be about to do so.

It just occurred to me that the drive to stop Cameron by the media and the EU, using whatever means, might have been wrong-footed by the Lib Dem ’surge’. If the postal votes have predominatly gone to Labour, and the ballot box ones are moving more to Lib Dem, the programme will dislocate, with neither Labour or Lib Dem getting enough votes to block out Cameron.

It’s surely too late for the ‘harvesters’ to swap enough postal votes over from Labour to Lib Dem, to have any meaningful impact.

What are the number of postal votes estimated for this election? 5 million? The die could already be cast, and Cameron is using the tactic of going soft on Clegg deliberately to dislocate Labour’s attempts to rig the result. He must have calculated the effects of doing live debates carefully and would have known that Lib Dems would get a boost, and Brown a kicking.