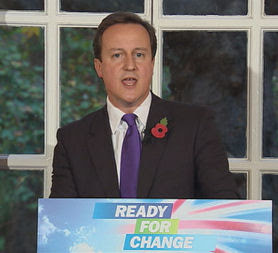 Lib Dem promises on EU referenda stink. Clegg’s offer of an IN/OUT referendum on the EU is about as manipulative as it is possible to be.

Clegg’s offer of an IN/OUT referendum now is circumscribed with a condition, which would enable him to say the right circumstances had not occurred. He is vulnerable on his betrayal of his earlier promise and needs to muddy the waters. Cameron needs to probe Clegg’s ‘promise’and point out that his party voted for the referendum, just as they promised.

But he could also go a lot further, and this might be the ideal moment to do so.

But could he pull a eurosceptic rabbit out of the hat here, and use the debate as the opportunity to expound a development of his current EU policy?

Could Cameron not adopt the same promise without the blocking condition?

If Cameron were to offer an IN/OUT referendum on the EU at some time during the next Parliament without any conditions attached, that would surely clinch the deal. He would only be agreeing with Clegg and the media euro-luvvies after all, and merely removing conditionality.

Here is a great opportunity to use Clegg’s treachery back against him, not be perceived as an aggressor, but as the supporter of a policy proposed by his opponents. Cameron’s promise to renegotiate and repatriate powers has always been criticised as lacking any real teeth. With an IN/OUT referendum required as part of the Conservative position on the EU, without conditions, to be held during the next Parliament, Cameron would seize the initiative from Clegg, and romp home.

The wonderful part about it is that all he would be doing is saying to Clegg – ‘I agree with your approach to the problems of Britain’s EU membership. Let’s first attempt a renegotiation to see if we can improve the terms of our membership though, and then let’s ask the people if the new terms are good enough. Yes. Let’s do it. Let’s hold an IN/OUT referendum during the next Parliament without conditions’.

He could make Clegg sound like the eurosceptic, saying that it is better to attempt a renegotiation than just to quit the EU in an IN/OUT referendum.

From Ted commenting on PB

On thread – the Lib Dems are only offering a once off IN/OUT referendum. If you vote OUT you don’t get another vote. If you vote IN then there is never a need for another vote – except of course when Government panics and agrees a new relationship “to stop economic meltdown”.

Cameron is proposing that each change is judged on its merits and put to the people but should say he’d consider offering an In/Out referendum as well if the situation demanded it (other countries wanting major change in treaties).

I think Cameron is going to come out swinging tonight, last week they said he was too timid, i think we may see a lion roar tonight, passionate anger, he does this best.

It ties in with the story i read today, Cameron saying this was make or break tonight.

Cameron may just go for the whole enchilada tonight and lay waste and telling the truth, damn them if they don’t like it. 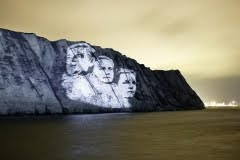 (it’s why we are called Albion by the way – it means the white island, same derivation as The Alps meaning the white mountains)

The Sun, Times and the Telegraph cite Open Europe’s calculations that Lib Dem leader Nick Clegg received an estimated £2.5 million in salaries and allowances over ten years working in the EU institutions. His gross salary over five years working for the Commission was calculated as €282,518 while his salary as an MEP from 1999-2004 was €484,883, based on average exchange rates at the time.

Mr Clegg was also entitled to up to €52,444 in allowances as a Commission official, €1.05 million as an MEP for his travel, office and subsistence, and an additional €1 million available for his office staff at the European Parliament.

While the figures for Mr Clegg’s past salaries are known, the lack of records kept and requirements for receipts mean there is no way of knowing the exact expenditure of the allowances.

Open Europe’s Mats Persson is quoted in the Sun saying, “He’s been part of the privileged political class for years.” The Times quotes Mats saying, “By no definition can he be considered a political outsider and his claims to being one are simply not credible.

For ten years he was on the EU’s generous payroll, so it is no surprise that he is out of step with the British public on Europe, including on his insistence that the UK should still join the euro, which is a ludicrous idea in light of recent events.”

Meanwhile, the Telegraph notes that, while a partner at Brussels-based lobbying firm GPlus, Mr Clegg was involved in a successful lobbying effort by the Royal Bank of Scotland to weaken EU financial regulations.