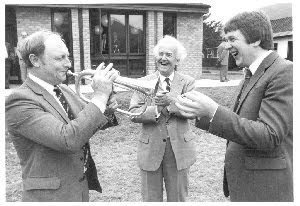 Watching the Labour Party Elvis on the BBC singing ‘The wonder of you’ was excruciatingly embarrassing. It was like another Neil Kinnock moment, when they sang ‘we are the champions’ at the pre-election rally.

Looking at this performance, I’ve realised what the problem is. They keep singing the wrong songs. Kinnock should have sung not Queen’s ‘We are the champions’, but their equally well known ‘Another one bites the dust’.

Likewise, Brown should not have been serenaded with ‘The Wonder Of You” but an adapted ‘Return To Sender’. I suggest a few lines for this below –

We keep on voting Conservative,
But Labour keeps coming back…

They put hundreds of votes in the mail box,
and send them special D.
You can vote for whoever
But Brown’ll come back, you’ll see.

In two weeks time, Elvis can come back and do a Brown version of Heartbreak Hotel.

Ever since dear Tony left me,
The Party’s been total Hell.
He never lost an election,
But I ain’t done so well.

Music and politics can mix well if done right.

No one minds a knees up. But these Labour election-time musical cock-ups are becoming a regular feature.

What will they do as an encore? Gordon Brown miming ‘I Just Wanna Be Your Teddy Bear’

The original Kinnock pre-election ‘We Are The Champions’ strangely doesn’t appear on Youtube. So here’s The Queen doing it.

Takes you back, doesn’t it. As does this one of Kinnock, before Labour went ‘new –