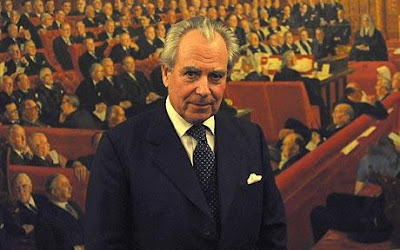 Lord Pearson UKIP leader. Sidelined.
One curious feature of the current polling landscape is the collapse of the vote for ‘others’ and their removal from the political scene. The details of polling, as I understand from comments on Political Betting, are showing a much reduced intention to vote UKIP.

It seems unlikely these voters have gone back to the Conservatives, given their fall from about 38% to about 32%. There is another possibility. They’ve decided to back the Lib Dem surge.

As the Lib Dems are the most europhile of all the political parties, even advocating membership of the Euro, this would be a curious development. Yet is there another factor here?

UKIP will never make any progress under First Past The Post. They need PR more than any other party, if they are ever to gain leverage over power. Have they fallen for the PR ruse that the Lib Dems use, when they say they support greater fairness in the voting system?

There is only one certainty about PR. The Lib Dems would never introduce it under any circumstances. For two reasons. Once they get above the FPTP hurdle and win big numbers of seats, (if they do), they would never want to assist the Greens to chip away at their support.

And the Lib Dems will not quickly forget that UKIP came second in the European elections in 2009, sending them and Labour packing. UKIP and Conservative between them were close to absolute majority. In the UK, PR might guarantee a referendum would be taken on the question of the EU at last. Clegg, as a committed European, would never risk that.

The one thing you can be sure of, is that once the Lib Dems get close to power, their advocacy of PR as an electoral system will be gone.

But UKIP, ever keen to smash the Conservative Party, who they feel betrayed them when Thatcher and Heath signed us into the EU, are probably crazy enough to think the Lib Dems would give them the PR system they crave.

Is that where Ukippers have emigrated to?

As I say to Ukippers, why would the media be straining every limb to shoe in Clegg, if Cameron were a europhile? It is precisely because they want Cameron stopped, and Brown is failing to do that, that Clegg has been released with the current media frenzy. I used to say that cameron was a 50:50 risk of being a eurosceptic or a europhile.

After what’s happened now, I’d move that to 100% certainty that he’s a eurosceptic, and the natural place to vote for any Ukipper. The Clegg game is a media coronation to stop Cameron. Why would they bother if they felt confident Cameron would sell out Britain?

2 Responses to “Are Ukippers Backing The Lib Dems?”