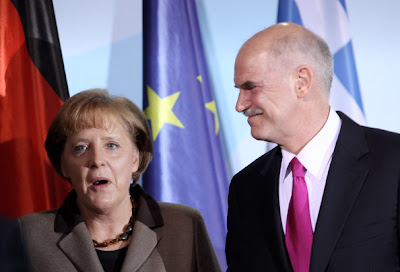 In the world’s markets, it is being assumed that the rescue of the Greek Euro is a done deal. It isn’t. The potential for this situation to crack open and spill in all directions is still very much in place. Only now is Germany faced with the reality of bailing out the weaker Euro countries. It will require billions and billions going into the future. Quite simply Germany cannot afford it.

How long will it take before the political wish to keep the eurozone intact is faced with the impossibility of doing so? That moment is getting closer by the day.

German Finance Minister says Greek bailout conditional on further austerity
The Times reports that German Finance Minister Wolfgang Schauble has warned that his government may block the Greek rescue package until the country agrees to tougher austerity measures. “The fact that neither the EU nor the German Government has taken a decision means that the response can be positive as well as negative,” he said. “It depends entirely on whether Greece goes through with the strict austerity in coming years.” Wall Street Italia quotes Amadeu Altafaj Tardio, a spokesman for the EU’s Economic and Monetary Affairs Commissioner Olli Rehn, saying, “any member State can block. It is their right if they still think that it’s not yet needed and the financial stability of the euro area is not at stake.”

A bail-out could still be effectively refused. If the terms are made so onerous that Greece would not want the bail-out offered, that is as good as Germany refusing one. But is a bail-out even legal?

The WSJ notes that Mr Schauble is due to meet with the Bundestag’s parliamentary parties’ floor leaders later today to discuss the bailout. Hermann Otto Solms, a finance spokesman for the FDP, a junior member of the governing coalition, said: “Our party is very concerned that it is not going to be a one-off rescue, but will turn into continuous, automatic help for any country that ends up like Greece. That we cannot accept”. Die Zeit quotes him saying, “We do not want an EU monetary fund.” Guido Westerwelle, the FDP Foreign Minister said: “Greece cannot receive a blank cheque”.

Hans-Peter Friedrich, head of the CSU group, said Greece should “seriously consider leaving the eurozone,” according to the Telegraph. The Chairman of the SPD opposition, Sigmar Gabriel, is quoted in Die Welt saying, “[Chancellor Angela] Merkel has deceived the Germans.”

Yet to the media it is unthinkable that the eurozone would not be saved. The whole political structure of the EU is swaying in the breeze. What happens when the wind accelerates, and the next storm comes in? It will crack. That’s what it will do.

A Die Welt leader argues, “The German chancellor can make as many admonitions as she pleases. She could even threaten to turn down the request for aid. But this is no more than politically motivated banter. In the end, Germany will transfer its billions over to Greece – the pressure from European partner states and the financial markets is too strong”.

Yet a note of realism is struck in the British media.

The Guardian notes that ministers have again warned that the EU-IMF bailout package will end up being far more than the initial €45bn promised with French Finance Minister Christine Lagarde, pointing out that the €30bn pledged by the EU for the €45bn bailout was just for the first year of a three-year deal.

In the Telegraph, Ambrose Evans-Pritchard argues, “Europe is at last paying the price for fudging the true implications of EMU 19 years ago in that Medieval city on the Maas, gambling that it would one day be able to lead Germany by the nose into a debt union.” A WSJ editorial argues “a bailout would, of course, end nothing. What it would do instead is open a wide new world of moral hazard – for Greece, for the countries providing aid, and for the future of the entire euro-zone.”

The clock is ticking.

Market rates for Greek debt are surging this morning.

The FT todayThe Greek two-year bond yield jumped 258 basis points to 12.71 per cent – a fresh high since the country joined the euro in April 2001. The premium investors demand to hold Greek bonds over German bunds also rose to 12 percentage points.

“The probability of a Greek default is close to zero if the country receives a bail-out from the IMF and the EU,” said Gary Jenkins, head of fixed-income research at Evolution. “But in the medium term, there is still a big chance of a default unless the Greek economy improves. Investors are worried that it won’t.”

The WSJ – The Greek debt crisis is approaching a moment of truth. With short-term Portuguese, Spanish and Irish bonds falling sharply Monday, euro-zone policy makers are running out of time to stop the crisis engulfing other member states and threatening the euro area as a whole. To avoid contagion, three things must happen: The Greek problem must be sealed off; countries need to flawlessly fulfill their deficit-reduction promises; and global growth needs to be buoyant. That’s a tall order.

In the near term, policy makers need to squash all talk of a Greek debt restructuring because any suggestion a euro-zone country might default would be disastrous for other member states. But that requires European politicians to persuade an increasingly skeptical market that Greece’s problem is one of liquidity, rather than solvency.

A few weeks ago, a one-year €45 billion ($60 billion) support package might have bought Greece and the euro zone some respite. Now, the markets increasingly appear to be demanding a much bigger display of confidence: Barclays Capital estimates €90 billion over three to four years might be needed. Get this wrong and serious damage could be done to the European banking system. Belgian, French, German and Dutch banks all have significant exposures to southern Europe, J.P. Morgan notes. Yet the bigger the liquidity-support package, the greater the risk of losses for other member states if Greece’s problem does indeed turn out to be one of solvency. That makes the situation much trickier politically.

It’s a choice of eat a small amount of shit now and bail out Greece, or eat a massive amount of shit later. The only problem is the small amount is still far too large for European governments to raise in their current enfeebled condition. And politically it could open up a whole new can of worms, where the German government is put into conflict with German courts over the specific prevention of bail-outs in Treaties. A large majority of the German people would also be turned against the EU. The political fall-out could even be greater if the bail-out goes ahead than the financial fall-out if it doesn’t.

In reality there is only one destination, a break-up of the eurozone. As politicians cannot stomach the prospect, it will be an event-driven dislocation and collapse.