Click on chart
The news of the Pound Sterling falling in the Forex is being linked in the media with the alleged fall in the polls to 2% by Cameron’s Conservatives. This is an appealing idea and it makes nice journalism. But is it true?

The £ started its recent decline in November, one month before the Hung Parliament Narrative began, and when the Conservatives were polling nicely.

The fact that the government’s revenues are still falling, and its debts still rising month on month (as not admitted by Darling who claims his borrowing requirement is still on track)is far more likely to be weighing on market nerves than opinion polls.

The debts were out of control a long time ago, not just this week, and it is now sovereign debt which is being brought into focus as the Greek Euro situation unfolds.

The You Gov Poll result, being changed in the Sunday Times between editions from 6% to 2% to match the headline in The News Of The World just adds poignancy that things in Britain are not quite right, and that information is all over the place after 13 years of lies.

The market though was going to fall anyway, as a look at the chart would tell you.

I doubt if a poll giving Cameron 20% would make any difference. But as we know, news deals with narratives, none of which have much solidity behind them. We are a species which falls easily for myth and deception with little interest in truth and cold hard facts. 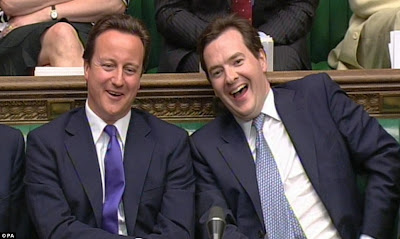 The Conservatives Handle The Economy Better Narrative (CHTEB) is not a new one, and it has come back to life coincidental to the currency falling, neither the cause of it, or caused by it. It has been in the news for years that the economy is in serious trouble due to excess debts. Most people know that Tories don’t like borrowing and that Socialists do. The connection was lying around waiting to be made.

The CHTEB Narrative is working well as the antidote to the Labour Election Planners’ (LEP’s) HP Narrative. With that I agree. Osborne has hit the spot (not for the first time), but better to ascribe the credit to a rigged poll than a rather serious Eton-educated relative youngster seeking power over this country’s wrecked finances. Osborne impressed his audience last week, when he outlined how he would approach handling Britain’s finances.

The FT tells the story –

George Osborne, the British opposition finance spokesman, believes the slump reflects the fact that markets have started pricing in the risk of a Labour election victory.

Speaking just before a Sunday Times opinion poll cut the Tory lead to two points, Mr Osborne told his party’s spring conference at the weekend that there would be “a rush for the exits” if markets thought Mr Brown might win the election.

Nice one, George. Looks like you understand the game.