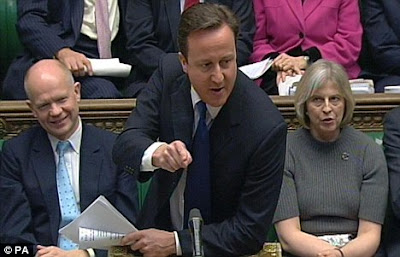 Many opponents of Cameron refer to him either as a spiv, or shallow, or superficial. Even those on his own side sometimes say they are not quite sure who he is or what he stands for. But in one instant at PMQs, a moment came when Cameron no longer displayed a groomed cool exterior, acting out the role of the unflappable Conservative Party leader. He really let rip.

The subject was Iraq, and Brown’s continual playing politics with soldiers’ lives. This was no act. Real anger was on full display as had not been in the House Of Commons for years.

The Blair era of spin had glided over all with grins, laughs and quips. There were no quips this time. Brown was coloured in. And from hereon, Cameron will no longer be seen as a lightweight, either by his own side, or by opponents. There is fire in that belly after all.

The moment Cameron showed his unairbrushed self, as described by Quentin Letts. .

3 Responses to “The Day Cameron Changed”