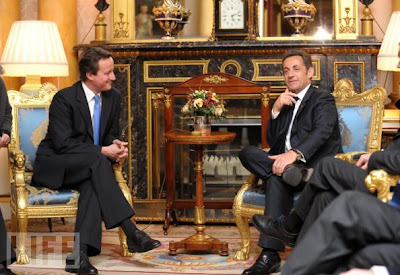 sarkozy and cameron in 2008
As the EU sets off in the direction of banning American hedge funds and private equity companies from having access to European markets, triggering instant hostility from around the financial world, and as the poor little things can’t bare to admit the Eurozone mess needs IMF help to sort it out, and they proudly announce their intention to create a highly unlikely-to-work EMF, they now have to contend with a new problem. The unpalatable fact is that, in the UK, David Cameron is looking likely to win the next election, despite the daily polls pourring out of You Gov and others saying otherwise.

Sarkozy has avoided Cameron like an infectious disease for two long years, and is now planning to launch a charm offensive to bring him on board with the EU corruption system. Sarkozy’s greatest triumph has been conning Gordon Brown into trusting him with financial regulation over the City Of London, which is already looking like a disaster in the making. He needs to secure his gains, and try to persuade Cameron it is not worth his political wile to challenge the status quo.

Merkel, being female, is not willing to forgive Cameron his past transgressions in impugning her authority, when he pulled the Conservatives out of the EPP very much against her advice and requests not to do so. Cameron in Merkel’s eyes, is still a very naughty boy, who needs bringing to heel the Germanic way, more of the cold shoulder.

The French, though, are offering Cameron a way to come in from the EU cold, and join the happy club. Hague is writing and speaking along the lines that the COnservatives don’t want their first months in power taken up with an EU confrontation, and no doubt Sarkozy will be, in his charming way, threatening exactly that if Cameron doesn’t cooperate. He will offer Cameron a chance to come quietly, or he will be pretty quickly assured of trouble coming his way from the European elites.

Meanwhile the lunacy of the financial regulation being proposed by the EU, spurred on by the humiliation of the PIGS’ making fools of the Germans and their precious Euro (thoroughly disliked by over 70% in Germany), will proceed to relegate Europe to the economic hinterland. Cameron simply cannot afford to get roped into a financial rescue of the Eurozone as under Article 122 of the Lisbon Treaty, or into part-funding an EMF. And he cannot afford to allow the French to banish American hedge funds and private equity firms from operating out of London.

A direct confrontation is inevitable.

But for now pre-election, Cameron will inevitably make a few of the right noises to Sarkozy avoiding any unnecessary heat, driving UKIPPERS into a frenzy, as he reassures Sarkozy. But the sides are starting to weigh each other up. That alone is the sign of the troubles to come.

On a visit to London on Friday Mr Sarkozy will meet Mr Cameron for the first time since June 2008 in an effort to lay the groundwork for a working relationship with the Tory leader should he become prime minister.

That it is their first meeting in nearly two years says a lot about the ill-feeling in the Elysée palace towards Mr Cameron – in contrast to the largely friendly and constructive relationship Mr Sarkozy has struck up with Mr Brown.

Mr Sarkozy took Mr Cameron’s decision to withdraw the Conservatives from the European People’s party grouping in the European Parliament as a snub and a rejection of the pragmatic brand of centre-right politics the French leader represents. Pierre Lellouche, France’s Europe minister, revealed French displeasure when he slammed the Tories’ move as “autistic”.

Her relations with Mr Cameron have been distinctly chilly since the Conservative MEPs withdrew from the EPP group. Ms Merkel made a big personal effort to persuade the Conservatives to stay in her political “family” in Europe, and took it as a personal affront when they refused to do so. There is very little sign of accommodation yet.

“The chancellor’s attitude is that if David Cameron becomes prime minister, he must calm down his attitude to Europe,” according to a close adviser to the chancellor.

“Merkel will treat Cameron like any other fellow prime minister,” said Elmar Brok, a senior Christian Democrat in the European parliament, “no worse than she would treat a socialist. It will not be the same as if they were in the same political family.”

While the Elysée palace agrees that the Conservatives have cast themselves into the wilderness, Mr Sarkozy’s officials and senior party colleagues are keen to establish a dialogue with Mr Cameron’s team to find out where they stand on various issues – particularly on financial regulation, defence and the EU – and to explore the potential for co-operation.

A speech by Mr Cameron late last year in which he abandoned a promised referendum on the Lisbon treaty and relegated as a priority his demand for a repatriation of powers from the EU has helped ease, although not erase, French fears that Mr Cameron is a Eurosceptic ideologue bent on picking a fight with the EU.

“It is clear that a referendum could have opened a difficult phase in our relationship, but David Cameron has dealt with that,” said Hervé Mariton, one of the few UMP deputies openly to support the Conservatives.

While Mr Sarkozy has until now kept Mr Cameron at arm’s length, Xavier Bertrand, the secretary general of the UMP party and a close ally of the president, has met the Tory leader in recent months, while Jean-François Copé, leader of the UMP deputies, has also established links.

“There is undeniably a willingness to rebuild links with the Tories,” said Jean-Dominique Giuliani, director of the Robert Schumann Foundation, which is close to the Elysée. “The abandonment of a referendum has not gone unanswered.”

See the letter sent by Geithner to Barnier, the new EU Financial Commissioner, who is blocking American finance out of Europe. There’s trouble coming.

And that’s going to be between Germany and France, the EU and the US and just about everyone as far as I can see. More Here.

But not while Gordon and Nicholas are so totally in love. When it comes to Brown-Sarkozy, relations are a little bit too cosy. 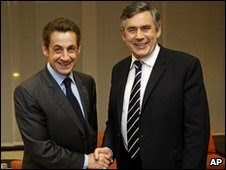 One Response to “Sarkozy Sizes up Cameron”