Has anyone else noticed, how Cameron is being given soft media all of a sudden? He’s being made to look Presidential all over the BBC as if there never was a promise of a referendum on the Lisbon Treaty, or a hint of a withdrawal from the EPP. What’s happening?

Brown must be beside himself. Sarkozy has been walking around with Cameron showing Gordon Brown that things are changing, and that Cameron too is being given the soft soap treatment, that Brown thought was his alone to enjoy.

Is this reality dawning at last? Will the rigged You Gov daily polls be stopped now as no one is being fooled by them, as the betting shows? The media are, in any case, merely advertising the extent to which they have completely lost it, by endlessly carrying polls that indicate Labour victory, when every man and his dog has clearly had enough of Labour in power after thirteen long years, with the financial taps left on at full flood. It’s time to dry out.

It’s as if they now have realised that Cameron’s going to happen, so they might as well try to corrupt him with soft media a la Blair, and see if he can be seduced by showing him how very nice it is to be protected by a well-oiled propaganda machine, and elevated up to the level of the European elites.

If the eurozone is to be saved, Sarkozy and the BBC know that it will need British money as part of the solution. They cannot afford to allow Brown and Darling to remain at the helm forever. There is nothing left in the cupboard as it is. After five more years with them in charge, Britain would become a wasteland requiring IMF intervention on an annual basis, making Greece seem like a financial paradise.

It feels like there’s something in the wind this week. Markets in the US are running out of steam. Gold is sagging from its highs. Money is talking loudly that there will be a second leg to this recession. And if the Euro is to stand a chance of survival, Cameron and Osborne will be needed to hold some of the confidence from collapsing. Is that why the world has suddenly changed its mind? Cameron, spiv, superficial and shallow, is this week being presented as Boy Wonder, the face of hoped for responsibility and solidity.

You know what I think. 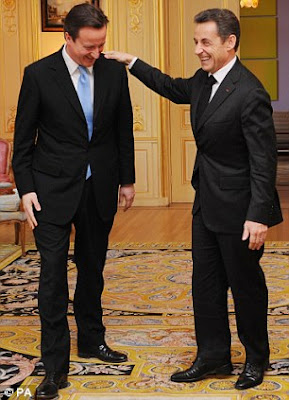 ALSO – maybe they prefer Cameron with a big majority where he can ignore troublesome eurosceptics, so they are now giving him the media he needs to get a landslide. They learned from the John Major era what happens with a Conservative government with a small majority.

Cameron will do well to act the good boy for now. And Ukippers can get ready to seethe as the BBC and the EU smooth Cameron’s way to power. I am sure he is well aware it’s a poisoned chalice. He’ll only take a sip.

Sarkozy’s former lover still wants him. But it’s ‘I am sorry, Gordon. I av a someone new in ma lahf’ 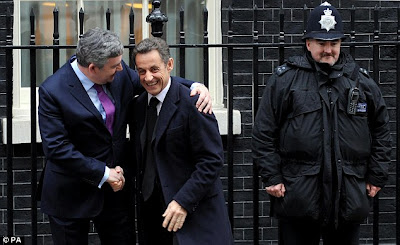 UPDATE – another reason they need Cameron – the EMF will need a new Treaty. Lisbon was thought to be the last but it isn’t. Cameron could be crucial for either offering or not offering a referendum on the EMF Treaty in Britain. If he prevents a referendum, the Ukip element inside the Conservative Parliamentary Party might rise up and try to throw Cameron out as leader. The whole progress of the European project is again falling back onto Cameron, in the same way that Lisbon would have done, if it hadn’t been signed.

The German Finance Minister Wolfgang Schäuble, backed by his Chancellor, Angela Merkel, has called for the creation of a ‘European Monetary Fund’ (EMF), modelled on the Washington-based International Monetary Fund. It would be used to provide assistance to stricken eurozone countries and would be reinforced by stronger EU ‘economic governance’ that could impose tough conditions on countries with excessive borrowings.

Schäuble wrote in the FT that eurozone members could be “granted emergency liquidity aid from a ‘European monetary fund’ to reduce the risk of defaults. Strict conditions and a prohibitive price tag must be attached so that aid is only drawn in the case of emergencies that present a threat to the financial stability of the whole euro area.” He added that “Should a eurozone member ultimately find itself unable to consolidate its budgets or restore its competitiveness, this country should, as a last resort, exit the monetary union while being able to remain a member of the EU.” (FT: Schäuble, 12 March)

France has given its backing to the proposed EMF as a “medium term priority” but the plan has already received opposition from Germany’s representative on the European Central Bank’s Executive Board Jürgen Stark and from German Bundesbank President Axel Weber, who described it as “not helpful”. (IHT, 9 March)

With discussions at an early stage, important questions remain unanswered, including whether the creation of an EMF would require a change to the EU treaties and whether it would include all 27 member states or just the eurozone. French officials have said there is an “open debate” on both issues. (FT, 8 March)

However, Angela Merkel has said that “without treaty changes we can’t form such a fund” – a view endorsed by Commission President Jose Manuel Barroso, since an EMF would appear to violate the current “no bailout” rule in the EU treaties. (EUobserver, 9 March; Irish Times, 10 March)

The EMF Treaty is said to be agreed to by Merkel as necessary, and yet she insists a Treaty is required to authorise it, and both her coalition partners are against one being put forward. Could it be that Merkel, apparently refusing to meet Cameron due to his quitting the EPP, is secretly hoping that he will be the way the EMF gets sidelined, so she does not have to openly have a confrontation with Sarkozy and have the Treaty blocked in the German courts? Stranger things have happened.

With the Euromuppets seeing how crucial Cameron is becoming to the next stage in the Euro crisis, it is no surprise to see him being courted by Sarkozy, and given a bit of BBC schmooze. Brown has sold out all he can, and has no more to offer. The EU is getting ready to let him go, and start the game afresh.

Before waxing ecstatic over Greece’s ability to flog some bonds, remember this: Greece is a sideshow. Spain is the main event.

Its economy, the euro zone’s fourth largest, is five times the size of Greece’s, and almost twice the size of those of other financially struggling countries — Greece, Ireland and Portugal — combined.

So it matters that Spain’s socialist prime minister, José Luis Rodríguez Zapatero, seems to be an admirer of Charles Dickens’s Mr. Micawber. Ask him what he plans to do about his country’s 11.4% fiscal deficit, and he first promises to extend his country’s retirement age, and then says he won’t. He promises a public-sector wage freeze, but his Finance Minister, Elena Salgado, says he really doesn’t mean it. But somehow he will cut the deficit to 3% by 2013. “We have a plan,” says Spain’s deputy prime minister, Maria Teresa Fernandez de la Vega. To most observers, that plan seems to be Mr. Micawber’s: “something will turn up.”

Spain has a huge unfunded budget deficit, with no political solution in sight. If Sarko thinks all this can be saved, he had better get a move on… His dreams of an EMF are the all that stands between Euro-hope and the collapse of the eurozone. Cameron might not need to do too much to check the EU. It might be about to check itself with its economic problems looming. Funding will be needed by so many countries all at once within the next year. Deflation will break the EU, not referendums.

8 Responses to “Cameron Relaunched By BBC As Boy Wonder”