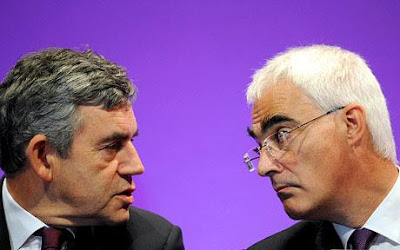 Darling’s claim of coming in under his borrowing target is spurious.

His revenues will be around £50 billion down on his budget target from last year – £450 billion, not $498 billion. Only if his spending has fallen by £60 billion from his target of £680 billion could he now claim to be under his targeted borrowing figure.

And don’t you just love him. In December, government spending outturn was reported as being exactly that, except the reduced figures were achieved without saying which spending it was that had been cut.

There were simply unexplained ‘accounting adjustments’. Surely any item of £60 billion in the national accounts is worthy of an explanatory note, at minimum.

Spending down by 10% is a likely tale. In January alone spending was ahead of forecast by a sizeable figure.

This is no different to Labour’s polling figures. They decide what figure they want and work backwards. Rigging polling is the normal fare of politics. Rigging the national accounts by £60 billion is not.

It seems highly likely that people with a mentality that permits them to lie about every single thing they say, even money, and who have been rigging byelections like Glenrothes, will inevitably be involved in rigging seats in the general election.

Banana Republic indeed is what we are. Darling and Brown should not be trusted a day longer handling the nation’s treasure. It was the lies that sunk Lehman BRothers. It is the lies that are sinking Greece. No one trusts any of the figures, and it will be the same problem in the UK. When the IMF turn up and tries to sort out Brown’s mess, they won’t have a clue as to the real picture. Lying in politics is bad enough. Lying about money in the middle of a major global financial crisis is treason. The risks to the economy are too great.

Here is the evidence of Labour’s nefarious financial fiddling, The December 2009 Treasury Spending Outturn Report. Spin down to table 1 – the size of the unexplained ‘accounting adjustments’ amount to 12% of GDP!! Why doesn’t Osborne or Cameron request a note of explanation from Brown at PMQs as to what these unexplained ‘accounting adjustments’ consist of – all £185 billion of them.

£76bn To purchase shares in RBS and Lloyds Banking Group

The projected GBP671bn spending was reported as down to GBP620bn by the budget in 2010. That was no doubt to hide the fact that revenues were down by GBP50 billion on projected level. Spending would more likely have been higher in reality than the figure projected in the 2009 budget which was based on the recovery starting in Q3.

8 Responses to “Brown And Darling Take Us For Fools”