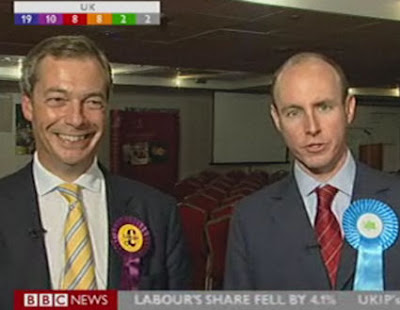 The E.P. eurosceptic media duo – Farage UKIP. Hannan Conservative
The Government is proposing the introduction of an Alternative Vote system for Britain’s elections. They’ve made a few calculations that this would add ten seats to their total and hurt the Conservatives by the same amount. Big bloody deal!

Are they really expecting the whole country to willingly be put through a major complication of the voting system, so Gordon Brown and Nick Clegg can grub a few extra seats. It’s pathetic.

If they really want to make a case for changing the electoral system, they should be talking about PR, as they always used to do. I am not a supporter of PR, but if they claim to be interested in making every vote count equally – the notion of fairness – PR is the way to go.

They always threatened that PR would be brought in, as the way to secure Britain’s enslavement inside the EU, and block out the Right. So what’s happened to that old bogeyman? Where are the Labour/Lib Dem electoral pacts being cut behind the scenes as in 1997 and 2001?

The answer is that the European Parliamentary elections in 2009 have given the government and the Lib Dems one almighty shock, wiping their PR smiles right off their faces. Labour came third with 18%, and Lib Dems came 4th with a mere 15%.

This was the ultimate humiliation for the Lib Dems, the party which previously bleated on endlessly about PR as their route into the big league. In fact the reality is they will be decimated, as why would anyone need a DOWN-THE-MIDDLE-OF-TWO EXTREMES Party any more?

The fact is that Britain’s two PR co-conspirators, Labour and Lib Dem would now face total humiliation under PR. Taking the EP result as a guide, they would be humiliated, getting only 33% of the total vote between them.

UKIP at 18% and Conservative at 36% (in the EP 2009) would have a clear majority of 54% as a coalition and are the ones who might be pushed together by such a system to form a government.

PR is now a silent topic in Britain, except in debating societies. No politician of the left will go near it. The EU have no option there any longer. This pathetic AV idea is the result. They’ve got no more rope left. It’s a joke.

Lib Dem spokesman on his feet trying manfully to explain why they will be voting for Disproportional Representation.

SNP ask why he supports this referendum on a measure nobody wants, but the LDs at Holyrood will not support a referendum on Scottish independence.