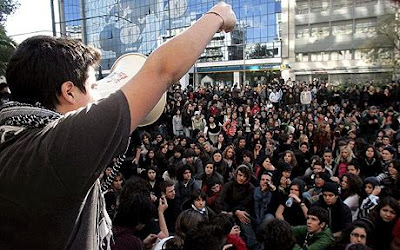 In this blog post, Channel 4’s Faisal Islam (Link Here) indicates that the possibility that Britain will be called to on to bail out the eurozone has not gone away.

The big meeting is on Thursday. No doubt Darling and Brown will dig in and try to resist the pressure to be included in the bail-out, but things being what they are, it is likely they will have to find a face-saving formula after being forced into being part of the bail-out. Good money will start pouring after bad. (Sweden is siding with Britain in suggesting the IMF bails out Greece, but that is as good as admitting the EU is no longer master in its own house).

The EU Commission has activated Article 121 of the Lisbon Treaty on February 3rd 2010 to take control of Greece’s fiscal decision-taking, as explained by Nigel Farage. A harsh economic regime in Greece will be the result. Farage talks of violence.

On Thursday, they will no doubt also activate Article 122, which allows the EU to ‘encourage’ all its members, including Britain, to come up with funds to bail out Euro members in difficulty. At the very least Britain is going to be pressured to act as guarantor to Greek debts (and maybe others).

(Article 121, however, does not have a basis for activation by qualified majority voting, but is only activatable in a ‘spirit of agreement’ between the EU’s members. Britain and Sweden are currently opposing an Article 122 rescue package, but will they be arm-twisted?)

The levers of power handed over in the Lisbon Treaty just two years ago, are being used and activated in urgency. The resulting political fall-out against the EU in Britain is to-be-imagined!!!

The solution to the Greek situation is only partly to be found in Greece tightening up its government spending. The fiscal situation can only be saved if the real economy improves. Across the eurozone the problem is lack of demand.

The FT writes – So long as the European Central Bank tolerates weak demand in the eurozone as a whole and core countries, above all Germany, continue to run vast trade surpluses, it will be nigh on impossible for weaker members to escape from their insolvency traps.

Why should Britain pay for a problem created in Greece and in German control of the ECB and the Eurozone?

In statistical terms, the problem is impossible to solve with austerity alone –

The FT In an economy without monetary or exchange-rate offsets to austerity, any reduction in spending is likely to lead to at least an equivalent short-run reduction in output (a “multiplier” of one). An attempt to cut a fiscal deficit by 10 per cent of GDP, via cuts in spending, would require an actual reduction of 15 per cent of GDP, once one allows for falling fiscal revenue. GDP would also shrink 15 per cent. As Desmond Lachman of the American Enterprise Institute pointed out in FT.com’s Economists’ Forum, the decline could be even larger.

In reality, the Euro is being defeated not by lack of political will from the centre, but by lack of the appropriate financial response. The only way the EU can drive through an austerity package and maintain a suppressed economy is to bribe the people at the top in Greece to cooperate and suppress rebellion on the street. The Greeks are not quite as stupid as the British though, who tend to sit there while their economy is decimated by foolish political decisions.

The Greeks and other Club Med peoples are more volatile by nature, and will tend to take action – as are Greek farmers already doing. The political fall-out will happen at street level.

As with Tony Blair becoming fabulously wealthy in Britain, with no obvious source for his untaxed income, democratically elected representatives can be bought, and persuaded to act against the interests of the people who elected them. In Club Med countries, there is no trust of governments in the first place, and violence is more likely. Maybe the Greek armed forces will ruthlessly suppress the actions of the opponents of the government’s austerity, and a police state will be the result. 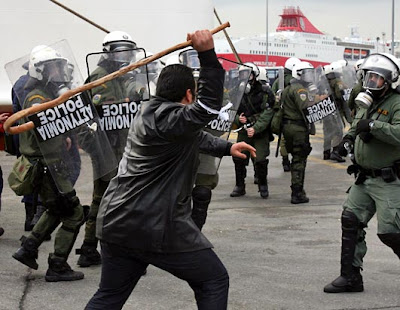 Either way, the Euro is not looking too hot.

Mervyn King hinted strongly that at G7 meeting in Canada last w/e, Eurozone officials (the Germans?) wanted to deal with Greece themselves

FT – Thousands of Greek civil servants on Wednesday staged a one-day strike and march to parliament in the largest protest to date against the government’s austerity measures.

All domestic and international flights were cancelled for 24 hours as air traffic controllers at Athens airport – employees of the transport ministry – joined the walk-out. Bus and underground services shut down across the capital.

The strike came amid mounting political tension over Thursday’s European Union summit in Brussels at which leaders will discuss a possible bail-out plan for Greece if it cannot meet payments on a soaring public debt.

Strikers huddled under umbrellas in drizzling rain at a rally in in central Athens. “Tax the rich,” said posters and banners around Klathmonos square.

Leaders of Adedy, the civil service union, criticised a 4 per cent pay cut for public sector workers and new tax measures announced by the government on Tuesday evening as “unhelpful” for wage-earners.

“The new tax structure still puts the most of the burden on the lower paid,” Spyros Papaspyros, the union president, told the rally. “We can’t make all the sacrifices needed to rescue the economy.”

Maria Ioakimidou, a social worker at a hospital who was listening to his speech, said the new tax measures under the austerity regime meant “the government is stealing from me. I have worked 20 years and earn only €1,300 a month. They should take the money from the rich,” she said.

Nikos Gardikis, a tourist port worker who was marching with thousands down a main Athens street, said,” it is right that the government is taking action (on the debt crisis) but cutting incomes of public workers is the wrong way to do it.” 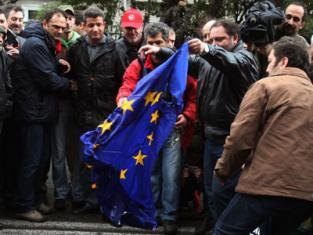