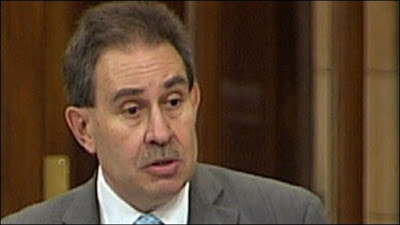 David Drew Labour MP Stroud
Labour MPs are quitting in droves. Brown is struggling to hold the remnants of New Labour together, as the greatest lying machine in British political history heads for the electoral cliff.

But not all Labour MPs want to join their fellow lemmings and dive off. Some realise that there will be a future, and that they still want to be a part of it. The only thing is that they will have to jettison spin and lies, and revert to a style more reminiscent of the Party in earlier times, the one where they actually tell the truth.

The only way to manage that is to renounce the core lie of the current government – that EU membership is desirable and popular. The broken promise of the referendum on Lisbon has to be reversed, and people asked who they want their government to be made of – either MPs, bless them with all their faults, or bureaucracy in Brussels and Europe?

One Labour MP who is ahead of the game has seen that he will have more chance retaining his seat if he comes clean on labour’s wrongdoings and pledges to his constituents that he will from hereon, become a supporter of the UKIP programme.

He had a majority of only 1000 in 2005, and so without a convincing change of direction, he could expect to be thrown out in the coming GE. But if UKIP withdraw from his seat, as Farage is hinting they might, and he campaigns on a Referendum on Britain’s membership of the EU, he could leave the Conservatives high and dry, and hold the seat.

The threat from UKIP is not merely the votes they can pull, which are already in Cameron’s sums. The real threat is if Labour MPs throw out Brown and become eurosceptic and withdrawalist as they were before Blair, persuade UKIP to join with them and they stand to get Britain out of the EU.

Against a Labour Party standing for OUT, Cameron would have no defence. This threat which was always there is now starting to happen.

3 Responses to “Labour As EU Withdrawalists Could Yet Sink Cameron”