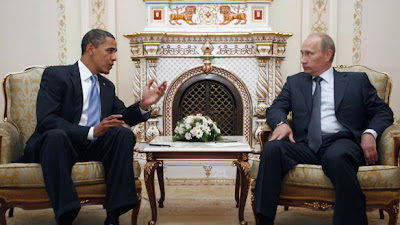 Obama and Putin Forming Informal Alliances Takes Pressure Off Germany
Today is the EU Summit where the Greek situation will be discussed – openly. Behind closed doors it has been discussed endlessly for months. The EU will no doubt propose a bail-out, but the details will not be explained until next week, according to the BBC.

Article 122 enables the Council Of Ministers to go to the aid of a member country in trouble, if those troubles are not of their own making, ‘in a spirit of solidarity’. Clearly France, Germany and maybe Holland are now able to raise enough ‘solidarity’ to do something to help Greece, but how much will that be in cash terms will be the question.

The British and the Swedish want to keep out of a bail-out, saying they are nothing to do with the eurozone, but they signed Article 122 of the Lisbon Treaty, just as surely as any other country, Euro or no. Brown may deny that he will be involved in bailing out Greece, but if the EU demands a ‘spirit of solidarity’, past form would suggest Brown will sign up to it.

In the USA, large swathes of state governments are equally insolvent as Greece, with pension liabilities growing each year nationally to between $2 to $3 trillion, with income from taxes tumbling. No one doubts that the USA will hold together as a political unit over there. Each state must find its own solution. The $ will not be affected.

It is because of doubts that the EU has enough determination to hold itself together that the financial questions are so great in the EU. The Germans took on the anchor role in the EU on quite specific terms, that each country would be responsible for containing its own spending. And that was all at a time when the EU was important strategically to the balance of world power.

If Greece is bailed out today, it will not be the end of it. They will not find it easy to get rid of their deficit inside the Euro. The Germans insist on the ECB maintaining an anti-inflationary stance, and there is such a poor level of demand across the eurozone as a result. Countries like Greece do not have the same feed of exports as Germany, and the Euro has made her tourist trade uncompetitive.

Either Germany today accepts that the euro and inflation have to become one and the same, or Germany will decide to continue maintaining a strong anti-inflationary, export dependent economy as she traditionally has done. Today will probably not bring an end to Germany’s commitment to the Euro, but Germany is unlikely to offer Greece a blank cheque either. The problem will no doubt be delayed but not solved.

Another factor not often mentioned in writings about the EU today is the reduction of threat from Russia since Obama took over the Presidency. Whereas Bush rubbed up Putin something rotten, tweaking his ego and rubbing his nose in the humiliation of losing Russia’ empire by expanding NATO right up to his door step, Obama seems to have rotated American foreign policy to the point where Russia now supports American-proposed sanctions against Iran. That would have been unthinkable under Bush. The focus with Obama has moved on to concern not with Russia as a future threat but China.

With the USA re-arming Taiwan and shaking hands with India, Germans can at last, after almost a hundred years, be more relaxed about their immdiate borders. The EU is less important than it was in this strategic sum, and not worth as much sweat to maintain as in previous decades.

Russia seems to be tamed, for now, by the emergence of China to superpower status. It is not inconceivable that Russia could in time be joining in with NATO.

Merkel’s CDU is in coalition with the Bavarian CSU which has far stronger views of the problems the EU is causing the German economy. Alsdo Merkel cannot ignore the German majority view that Germany cannot continue propping up the EU forever. As long as Greece doesn’t become a political basketcase, and an opportunity for others to subvert the security of Europe, the survival of the eurozone and the EU is not as significant strategically to the world as once it was.

Obama could not even be bothered to attend the recent EU summit. That tells you something. Whatever happens with the PIIGS and their fiscal deficits, it’s not going to chnage the world whatever Germany decides to do. The longer these trends continue, the easier it becomes just to let the Euro go, or shrink its area.

One Response to “The EU and The Euro Lose Strategic Significance”