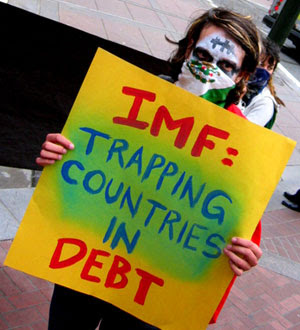 You would think the world had enough troubles already. But the IMF, ever keen to expand its role in the world’s economic management, has seen that its objectives can best be achieved if more countries get themselves into a financial mess and become dependent on IMF feeds of cash as massive loans.

The past idea of the IMF, which was to help countries stop themselves from getting into difficulties, has now turned full circle. Now they beg as many as possible to become irresponsible with money, so that the IMF can start acting in loco parentis, ticking off naughty children, lending them money and at the same time, taxing anyone who looks like they are getting too rich.

This is a bureaucracy full of ambition for itself,and no help to the world, like all the others that we come across. Just what we need.

This is a profligacy charter. All designed to encourage countries to spend more and make themselves dependent on outside finance, so that their democratic systems of government can progressively be ignored and overriden by the IMF and its One World Government brethren.

During the past few weeks, the IMF has suggested that countries might aim for a higher level of inflation than central banks traditionally do, and that countries might consider using taxes and regulation to limit surges of capital that could inflate asset bubbles. Both suggestions go against years of IMF doctrine.

During the recent global recession, the IMF eased its usual requirements that countries slash spending or raise interest rates in order to qualify for rescue loans.

It also created a new loan, called the flexible credit line, for countries whose general economic policies passed IMF review. Those countries didn’t have to meet specific IMF requirements to get approved.

Even so, only three countries asked the IMF for the credit line: Mexico, Colombia and Poland. Many others didn’t because they feared that turning to the IMF would signal weakness to markets and to their populace. In Asia, especially, the IMF is still unwelcome because of its heavy-handed actions during the financial crisis of 1997 and 1998.

The multicountry loan would be designed to overcome such objections.

Making money available as lines of credit, even without request, ought to lessen the “stigma” attached to IMF lending, the senior official said.

Approving groups of countries, rather than individual ones, could also help reduce the chance that a crisis would spread from one nation to another.

The Asian countries saw how the IMF likes to use money to establish power over them in the Asian monetary crisis oin the 1990s. They for the most part don’t want to know. Once bitten, twice shy.

Now Greece is learning how debt is enabling outsidsers to ignore their democratic preferences, and how individuals count for nothing. Their debt is becoming their EU slavery.

The answer is not get into debt if you want your democracy to survive, as with Greece and this pernicious One World Government slimeball approach from the IMF.

Britain under the Conservatives will literally be fighting for her freedom, by paying off her debts. Or if we fail to pay them off, the IMF will be delighted to set the terms of our future debt enslavement.

Monsieur Straus Kahn should be informed that he can take his cheque book and ram it elsewhere. Britain once Brown is nailed, will not be coming begging, thank you.

Market Oracle has a very disturbing report on where all this is going. I don’t agree with all his ideas, but if you are interested in this topic, the conspiracy theories are worth reading. On gold for example, the balance of supply and demand explains the price level quite well. People stop buying it once the price gets too high and start selling it and mining it.

Where I have sympathy with Market Oracel, if there was proper information available as to how the world’s financial system is working, there would be no need to imagine the very worst horror stories. 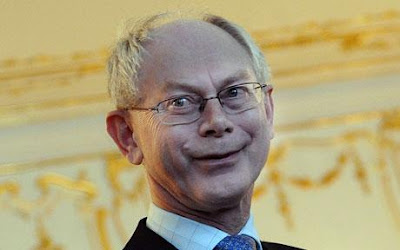 It is noticeable how Von Rompuy the EU President of The Commission is grabbing power away from the Heads of the Nations, and how he speaks so readily of One World Government. Out of financial crisis, those in the centre will be trying to expand their empires. See Telegraph on that ugly Von Rompuy here.