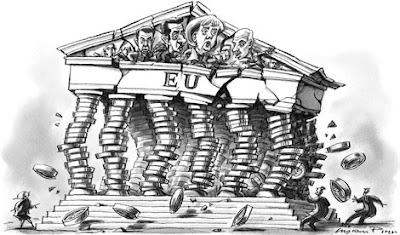 When Britain’s most pro-EU newspaper writes an article like this, you know that things are getting serious. Gideon Rachman explains in the FT how the financial crisis looks set not to be the expander of EU power, as Brussels hopes and expects, but the reason for it to fall apart.

A logical political response to Greek insolvency – and the threat of similar crises in Spain, Portugal and eventually Italy – might be to create common European taxes and a mechanism for big fiscal transfers between EU states. These are features that help smooth a currency union in the US, but that do not yet exist in Europe.

But there is no sign of any such move. Europe is stuck. So what has gone wrong? The problem is that the “economics first, politics later” method is almost Marxist in its assumption that economics will inevitably dictate a particular political response. But democratic politics involves choice.

The traditional EU method could only work when the political changes prompted by earlier economic decisions did not seem deeply controversial or unfair to ordinary voters. But the kind of political integration required by the euro affects ordinary citizens at a very basic level – since it involves big choices about taxation and spending.

As a result, it exposes a truth that ardent pro-Europeans are very reluctant to acknowledge. Most citizens of the EU still feel far more attached to their own nation than to the Union. “Europeans” are much less willing to bail each other out than they are to bail out their own fellow countrymen. West Germany spent billions to turn around East Germany. But there is little sign that the Germans are willing to spend further billions to turn around Greece – with the spectre of similar crises to come in Spain and Italy. The Germans may feel very “European” in principle. But when they are asked to start writing large cheques to support a bankrupt Greek state, they start to feel strangely German again.

The Germans don’t want to bail out the PIGS.

Any more we need to know. Not really.

The one thing Germany does still advocate is a European Army.

It already has one by the way in NATO. Why not just change its name? After all, what’s the North Atlantic got to do with it? The Feeble European Military Dependency sums it up better…FEMD.