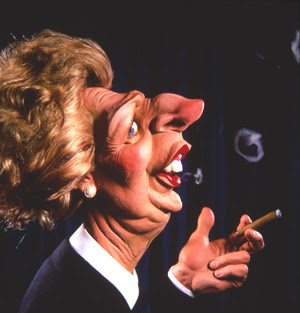 Mrs Thatcher on Spitting Image. She reduced Britain’s debts and dependency.
The news that the recession ended (again) with growth rising in Q4 2009 to 0.3% (adjusted from 0.1%) should not be greeted with too many shouts of ecstatic joy. The growth in GDP (a pretty meaningless economic statistic at the best of times) can all be accounted for as coming from increased government spending.

This from the WSJ Europe –

According to Jefferies, a brokerage firm, government spending in the fourth quarter rose at its fastest clip since 2003. That increase more than accounted for the positive GDP reading, which means the so-called “real” economy is still struggling..

Much more significant than Q4 ‘adjusted’ 0.3% growth figures, was the news of government revenues tumbling by £9 billion in January alone (0.6% of GDP), which came on top of the news that revenues fell by £29.6 billion to December 2009 (2% of GDP). This information means a lot more than flexi-GDP information, which can be manoeuvred easily enough by the raising of invoices, or other accounting adjustments. Cash is cash, and is not so easily lied about.

This and the news of highly authoritative Ipsos MORI Polling Organisation’s tightening Tory leads is enough to keep the Pound Sterling tumbling. I don’t think anyone’s listening to Brown and Darling chorusing their ‘recession has ended’ narrative any more. Money has heard enough of the blandishments.

And The Bank Of England is suggesting another bout of QE might help. It won’t. Asset prices need to fall, as does the £, so that the real economy where hungry buyers seek out bargains can drive up real growth. By pumping money in to keep asset prices up, activity is actually suppressed. A bit of egg is kept off City of London faces, and banking staff can claim huge bail-out bonuses. But to ordinary folk trying to make a living, lower house prices and property prices enable real economic activity to get started. To get a real upswing, you need the downturn to actually happen. Mrs Thatcher understood. It’s tough but it works. It’s called entrepreneurship.

Below – ‘when I first came to this land..’ sums up starting from nothing, albeit played in heavy rock mode. That’s what we need to do all over again. 1980s here we come.

3 Responses to “Q4 0.3% GDP Revival Was All Increased Government Spending”