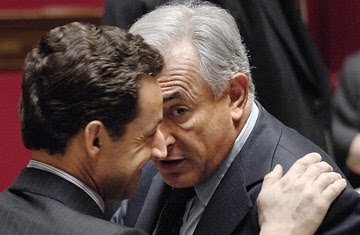 Sarkozy appointed Strauss Kahn to head the IMF. They would like to save the Euro. But can they?
One thing you never see is an estimate of the cost of the total package required to bail-out the Euro and buy it time. Yet working from figures given in the Wall Street Journal that about 20% of GDP will be needed to take pressure of Portugal, Ireland, Greece and Spain, you come to an initial figure of Euros 315 Billion. Greece alone would need Euros 50 billion, but Greece is not the whole problem by a long chalk.

If Italy is added to the list, which would be advisable, the total goes up to Euro 600 billion (US$ 800 billion). That would be needed purely to fund the governments of these countries current expenditure and pay interest for two years or so. It would do little or nothing to turn the underlying problem around.

The situation of the banks within Europe is not addressed. There could be a similar figure required to bail these out, as the accumulated debts based on property lending and other inadequate collateral is vast. It could be ten years or more before Property prices recover sufficiently.

The scale of the overall problem is probably too big for any other entity like the IMF to consider bailing out, apart from getting the Euro through another year or so. If a first year bail-out were to cost about US$1 trillion, it might be five years before markets start to lift again. By which time the totals required would have been multiples of trillions.

The size of any IMF rescue package is based on a multiple of that country’s shareholding, or quota, in the fund. The quota is set in special drawing rights, the IMF’s own monetary unit calculated daily from a basket of the world’s major trading currencies.

Under usual circumstances, the IMF can lend a country up to three times its quota but in special packages such as for Greece, the IMF can stretch its normal rules under what it calls its “exceptional access policy.”

The maximum provided to any country under this policy has been 11 times its quota, given to Romania. That suggests the IMF would be hard pushed to provide Greece with substantially more than €10 billion.

How much then would be enough? Greece says it needs to sell €54 billion of bonds this year, €24 billion of that in April and May.

In a research note earlier this month, Paul Mortimer-Lee, head of market economics at BNP Paribas, said that any bailout has to have the qualities of “shock and awe.” Looking at recent packages for Hungary (19% of GDP), Romania (14%) and Latvia (32%), he settled on 20% of GDP as the threshhold.

For Greece, this would mean a bailout of €50 billion. (Ireland would need €35 billion, Portugal €30 billion and Spain €200 billion.) That figure is higher than most guesses about the size of any likely German-led rescue for Greece, which peak about €25billion. But even that number— half of Paribas’s “shock-and-awe” estimate— is twice the size of any bailout the IMF is likely to provide unless it stretches lending limits way beyond what it has so far.

The other problem is that all financial organisations rely on outsiders to inform them of the risk levels for lending and investing. How can people like Moodys be able to forecast the pattern of markets in the next few years? The rating agencies have proved completely inadequate in advising about the risks inherent in subprime investments, for example, and no doubt they are well behind the mark, in realising how near to collapse the weaker European economies are too.

Even with the political will being there in Germany, and it isn’t, the size of the problem is simply too big. Some writers tell the Germans that they would have a higher exchange rate if they weren’t in the Euro and that the Euro has helped their manufacturing and exporting business. How is that? Germany went into the Euro at a high rate, and the Euro had until recently appreciated against the US$ over ten years by 50-60%. It was only the fact that Germans accepted pay cuts that Germany was able to remain competitive. The Euro also raised living costs in Germany with accelerating inflation. When ordinary Germans tell you they have lost out through the Euro, believe them, and not the spin-meisters whose task it is to try to save the Euro.

Ordinary Germans might be a compliant lot but coming up with $1 trillion once every other year for five or six years to save their profligate EU partners will no doubt prove beyond the realm of possibility and acceptability. Germany after all has to save her own banks. The current package of Euros 25 billion under discussion is probably only 1% of the total that would be required in the end of the day, to stand a chance of saving the Euro. And even then saving the Euro has only a chance of being achieved if the others change their behaviour, which seems highly unlikely.

If even finding 1% of what is needed is proving politically impossible, it might be wise to look at other alternatives – and that must mean Euro break up and devaluation. Sooner rather than later. Unless the IMF wants to drag out the agony any longer that is.

Heartbreak for Euro-lovers must be faced sometime.