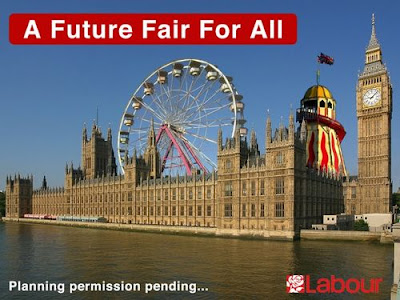 This is brilliant, Labour’s latest election slogan, I mean. With the Pound crashing on the foreign exchanges, spending in the shops hitting new lows, and 7 million out of work, here is the slogan to sum it all up. After thirteen years of Labour in power, things are now so bad in the present time, and the past so wretched, the only thing that can be spoken of safely, is the future.

Of all the Labour spin-meister’s works, this is surely the greatest. The middle ground is lost. The third way is buried. Cool Britannia has burned. All that is left is the future, the promise of an equivalent misery for us all, as we live on despairing in Brown’s bankrupt Britain. With no one prepared to believe his tarnished ‘how I saved the world’ version of history, or ignore our current slide down the world’s rankings of every significant measure, the only thing left for him to safely exaggerate is what is to come.

Sweet, isn’t it, that he still wants to try.

And because we’re Brits, we pretend to believe him, as we don’t like upsetting folk unnecessarily. He might come back on screen again as last week, and cry some more, if we’re beastly to Gordon. It’s better to be nice to Gordon if we don’t want him to blub.

It’s only another month or so. And we won’t have to pretend any longer and he’ll be gone. Phew!!!

There should be a statue of him erected in Parliament Square, his face looking up angrily to the sky with his huge mouth open for the kids to pass through, and slide down to their unemployed Dads waiting patiently below. It would be a fitting remembrance of the Brown Years for future generations, as they struggle to pay off his debts.

And another good one – 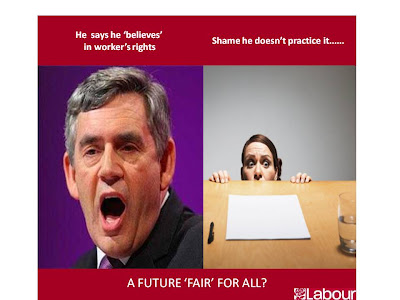 5 Responses to “Candy Floss At The Job Centre.”