When the real story gets to be told, the long reign of Gordon Brown over Britain, will be explained by two words – spending and debt. The economy Brown inherited in 1997 was as orderly and successful as any in the world. Debts were lower than any time since WW2. Growth was rising. Unemployment low and investment strong.

Thirteen years later, Britain faces ruin. Government spending in 2009/2010 is over GBP 800 billion (not the GBP 620 billion claimed), with revenues around GBP 450 billion down from GBP 600 billion two years before. Revenues are still falling.

The markets have accepted all that has happened to date and taken it in their stride, allowing politicial leaders to keep face and claim that the ‘recession’ will soon be over.

But yesterday that all changed. The realisation dawned that the debts of the high spending countries, of which Britain is the world’s most glaring example, are beyond anything that the countries can possibly cope with. The spending of the British government will need to come down by at least one third, and probably more as revenues keep tumbling.

Brown’s expanded state is insupportable, and markets are no longer willing to look the other way.

There is no longer anywhere to run. Britain is locked inside the EU, which bars us from access to world markets. Read the piece below taken from the FT (no links as it’s subscription), and feel the level of desperation in its words and the sentiments, coming from Mervyn King.

The second that Quantitative Easing is paused, collapsing confidence seeps back in. And yet QE cannot be kept up indefinitely. And in any case, at some point asset prices have to got to be allowed to fall to the point where investors want to buy. Reality has finally arrived to break up the New Labour Debt Fantasy that government spending can solve every problem known to man.

See a video presentation on FT from John Authers explaining the situation HERE. Look especially at how consumer confidence is falling, and how that will hit asset prices. This is the US, but Mervyn King in the UK is saying very similar things.

Labour’s run of luck is over. But would anyone envy David Cameron facing what he will have to face after the election?

Britain’s real medium-term problem is not rising prices, but failing growth. Risks remain on the downside. The fiscal deficit of nearly 13 per cent of output must, in the coming years, be reined in. The state, whose expansion prevented a fall into a long depression, will decline as a source of demand.

The household sector, too, is impaired. In 2008, the sector’s outstanding debts were equal to 181 per cent of disposable income. The equivalent figure in the highly indebted US was 132 per cent. UK consumers, now more nervous about their jobs, are saving keenly.

Foreign demand, meanwhile, cannot be counted upon to save the UK. Sterling has depreciated by 17 per cent over the past two years. But, as Mr King said, “recovery in our largest export market – the euro area – appears to have stalled”. British companies may be able to build market share, but the markets may be stagnant.

There you have it from the authority of the FT and the Governor of The Bank Of England. We are locked out of the world’s markets by the EU, and are now being dragged down to the floor.

Not only that. We are now being approached as a possible source of funds to bail out Greece and other PIIGS to save the Euro. What a farce! We are unable to pay our own crazy levels of spending. The £ is wilting on foreign exchange markets, and now they want to dip into the funds we have deposited with the European Central Bank.

The Germans are no more willing than us to carry the burden of the Euro as it heads for collapse. The joke is over. Gordon Brown and all the other comedians who signed Europe into an impossible contract of ‘Ever Closer Union’, can now face up to the lunacy of their ambitions. And as usual it is markets that are calling out the truth to them. Money talks louder than politicians, and usually contradicts them. Spending is not the answer to everything, Mr Brown. 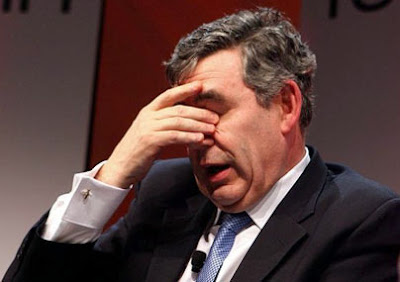 And it’s no good shooting the messenger. He is said to released the ‘forces of hell’ onto his Chancellor Alistair Darling for admitting that the current contraction is the worst for 60 years. Telegraph Report Here.

“Nobody likes the sort of briefing that goes on,” Mr Darling said, “the forces of hell were unleashed”.

Just face it, Gordon. Your luck’s run out.

Iain Dale publishes a transcript of the SKY NEWS interview with Alistair Darling in which he complains about Brown’s bullying ways. You have to ask, ‘would all this be coming out if the stats were all rosy?’ The real budget figures will be miles away from the optimistic forecasts made in March 2009. Darling’s trying to create a distraction.

For the rest of us, it’s cheering up time. It’s only money. Life goes on. OK. Chill.