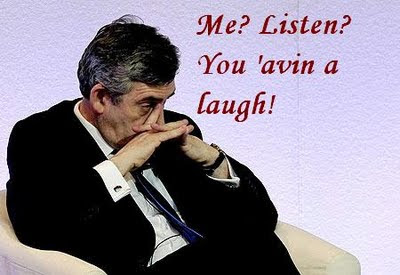 I have been writing for some months that the Chancellor’s figures for Britain’s government borrowing this year appear to be a gross underestimate. It is ‘pleasing’, therefore to see, at last, the news media starting to say the same kind of things. They claim the January accounts which showed revenues down £9 billion prompted them to realise the true situation. Yet even by December revenues since April were down £29.6 billion, and earlier months had been showing a declining trend. Yet for some reason Darling was allowed to keep on repeating his £178 billion figure unchallenged, which seemed odd to me.

This morning, however, I don’t want to go over all that again, especially if such thoughts are moving from bloggers to the main stream of the media and the markets. Instead I find myself being greatly ‘cheered up’ (not my style to be cheerful when things are bad. I prefer brutal honesty) by this list of Labour’s achievements in power, placed in the comments on Guido by 13 Years And Counting.

Read it and weep. Why not? We’ve seen all our ‘New‘ Labour’s top brass desperately trying for the sympathy vote on TV recently, crying their eyes out, as the bullies finally crack.

Take a look. Now it’s our turn to weep.

THESE ARE BROWN’S ACHIEVEMENTS AS PM AND CHANCELLOR, the legacy your families will pay for generations to come.

-22,500 of debt for every child born in Britain
– 111 tax rises from a government that promised no tax rises at all
– The longest national tax code in the world
– 100,000 million pounds drained from British pension funds
– Gun crime up by 57%
– Violent crime up 70%
– The highest proportion of children living in workless households anywhere in Europe
– The number of pensioners living in poverty up by 100,000
– The lowest level of social mobility in the developed world
– The only G7 country with no growth this year
– One in six young people neither earning nor learning
– 5 million people on out-of –work benefits
– Missing the target of halving child poverty
– Ending up with child poverty rising in each of the last three years instead
– Cancer survival rates among the worst in Europe
– Hospital-acquired infections killing nearly three times as many people as are killed on the roads
– Falling from 4th to 13th in the world competitiveness league
– Falling from 8th to 24th in the world education rankings in maths
– Falling from 7th to 17th in the rankings in literacy
– The police spending more time on paperwork than on the beat
– Fatal stabbings at an all-time high
– Prisoners released without serving their sentences
– Foreign prisoners released and never deported
– 7 million people without an NHS dentist
– Small business taxes going up
– Business taxes raised from among the lowest to among the highest in Europe
– Tax rises for working people set for after the election
– The 10p tax rate abolished
– And the ludicrous promise to have ended boom and bust
– Our gold reserves sold for a quarter of their worth
– Our armed forces overstretched and under-supplied
– Profitable post offices closed against their will
– One of the highest rates of family breakdown in Europe
– The ‘Golden Rule’ on borrowing abandoned when it didn’t fit
– Police inspectors in 10,Downing Street
– Dossiers that were dodgy
– Mandelson resigning the first time
– Mandelson resigning the second time
– Mandelson coming back for a third time
– Bad news buried
– Personal details lost
– An election bottled
– A referendum denied

As you dry your eyes after reading that list and dwelling on our collapsing finances, turn a thought to why every day our TV screens are filled with weeping celebs. The Prime Minister’s had a go, his wife, Alastair Campbell and a host of others. Tiger Woods is at at it this morning, exposing a vulnerable side I personally would rather not know about. If you’re going to shag half the world’s women, get on with it, and enjoy the ride, as it were. But don’t come blubbing to the rest of us about the consequences. He should take his punishment in silence.

Is it only me? I’ve had enough of all the sobbing, and begging for foregiveness at the altar of mass communication. The Coles are coming next, with yet more false tears being shed for popular consumption. 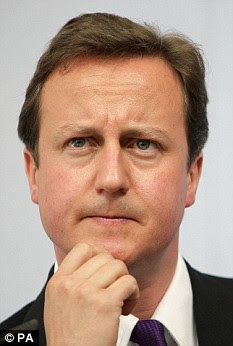 If nothing else, I hope Cameron won’t be a blubber. We need leadership, and urgently. Decisions, and a way out of the mess that Britain’s ‘charming’ socialist ways have made of our country. Tear shedders are a waste of time. We need action.

Ballot Boxes are interfered with

The Police can kill innocent people and get away with it

The state can kill people and get away with it

The State can torture people

Your children are monitored at School by Political Officers

Your innocent fingerprints, iris scans and biometrics are held by the State

You do not have the right to remain silent

You are watched on 4 million CCTV cameras

You may not photograph the Police

The media is controlled by the State

You do not have the right to protest peacefully

Your shopping habits are studied and logged by the State

Your emails and telephone conversations are recorded by the State

Your passport can be withdrawn at the whim of the State

Government agencies can use lie detector tests on you.

3 Responses to “Thirteen Years And Counting”