click chart
The Russians have put out a news story that the Chinese are going to buy the 193 tonnes of gold which is being put up for sale by the IMF. It seems that there have indeed been discussions about China buying the gold, but you can bet one thing. The Chinese will not want to buy the gold at the current spot price if they do.

They are negotiating. The Russian rumour was intended to send the market on a upwards trend again, and help to push the Chinese negotiators into a higher price. That attempt seems to have backfired.

The Russians have drawn attention to the fact that a negotiation is taking place, which indicates that the current gold price is not sustainable – the exact opposite result to the one they intended. The gold price rallied this evening (London time) but is again falling back.

The International Monetary Fund (IMF) said it had no comment on a rumor that China is the buyer of the remaining 191.3 tons of gold the IMF is selling.

Alistair Thomson of the IMF’s Press Office told Kitco.com that the agency does not comment on speculative stories, calling this a “sensitive area” of discussion.

The unconfirmed rumor was based on Russian news reports and some sources said it boosted gold futures prices.

In his daily commentary, Jon Nadler, Senior Analyst for Kitco Metals Inc. wrote, “According to the Russian FinMarket news Agency, Chinese officials have confirmed the intention for China to buy the remaining 191.3 tones of IMF gold that are still for sale. The rumors have however not yet been confirmed. “

The IMF announced the sale of its remaining 191.3 tons to the open market in mid-February. Reportedly the IMF couldn’t sell its gold to central banks like China and India, traditional big buyers, so it had to resort to the open market.

In September 2009, the IMF announced an intention to sell 403.3 tons of gold; India, Mauritius and Sri Lanka purchased close to 212 tons by the end of the year.

It seems that the last buyer of gold is China. And they don’t like the price. What’s that going to do to the market in the days ahead?!!!!

In any case why would China want to pay money for gold? China is the biggest gold mining country in the world.

Market Oracle – Until this decade the Chinese mining industry was amongst the worst in the world. Gradually from 1979 onwards it allowed foreign exploration companies to explore the minerals in it’s geology. Welcoming foreign mining companies, with their expertise, capital and equipment, fed the growth of their mineral industry. From 1997 to 2007 China’s gold production rose 134%. It is now the biggest producer of gold in the world… a staggering rise.

China is well known for not wishing to pay spot prices for its sourcing of commodities. Why would she want to pay $1100 an ounce for what she can mine cheaply herself at maybe $200/300 an ounce? To keep the price high possibly, but that is not the Chinese way.

MINING WEEKLY – China said last April its official gold holdings had risen to 1 054 t from 600 t in 2003, with the increase attributed to purchases of domestically produced gold to help soak up unsold output.

FINALLY THE REAL STORY – (From Nadler on Kitco)

Well, Reuters came to the rescue of mal-informed readers and starry-eyed wishful thinkers who had been exposed to the same story by Rough & Polished over in Moscow: “The author of an article that said China had confirmed it would buy 191.3 tons of gold from the International Monetary Fund said on Friday she didn’t have official sources for her story.

Rough & Polished, a Moscow-based industry website, reported China had “confirmed its decision to acquire 191.3 tons of gold auctioned by the International Monetary Fund,” which helped push prices up on Friday.

Contacted by Reuters, the author of the Rough and Polished story, Nadezhda Shagrova, who works as a tour guide and journalist in Shanghai, said she did not have any official information to back up her story.

“The source for the story? Well, that’s been written about in lots of places. I mean, Xinhua news agency wrote about that and other official Chinese sources, lots of them. Why are you asking?”

Told that gold prices were moving on her story, she said: “No, no, there’s just no way that could be because of my article.”

No, of course there is no way, Nadezhda. Just try to get the facts straight next time. But, did you know that bikini models risk their health by wearing G-strings? So says Pravda. And now, for something completely…the same: trees on Mars! We kid you not. April first is at least a month away…but the silliness is rising faster than fresh dough. Jim Rogers denies having said this week that the British Pound is on the verge of collapse.

So China buying 200 tonnes of gold is a lie. As expected. But how dumb of people to believe the source and report it as credible. Does that include me? Nearly! 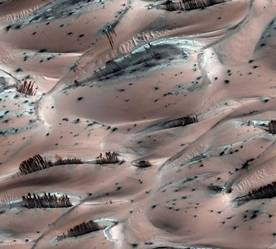 trees on Mars from the same website that reported China buying IMF gold, causing a $20 rally in the price. The eight year long gold price boom is now getting silly.

2 Responses to “Chinese IMF Gold Buyers Or Trees on Mars?”