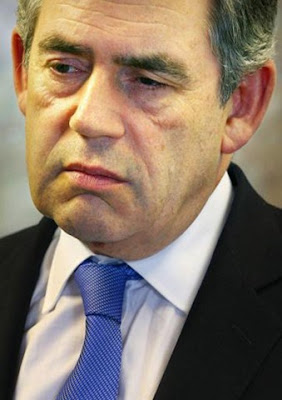 Recent days have been focused on Brown’s bullying dictatorial ways. Tonight attention is returning to another of his less charming qualities – his liking for electoral rigging practices.

Iain Dale says the report on the Glenrothes byelection is about to be published by the Electoral Commission. (Whoops! It’s a rare Iain Dale lapse. He meant Glasgow East), and it is not expected to be good for Labour.

(There are so many rigged seats, we get them muddled up)

This was the report on the Glenrothes election last year on the BBC website.

The Electoral Commission said the conduct of the count, last November, “went smoothly despite many challenges faced by the electoral administrators”.
However, it said some areas where the votes were being counted and collated were obscured from view.

It also voiced concern over aspects of the arrangements for postal voting.
Lindsay Roy held on to the Westminster seat for Labour with a majority of more than 6,000 in the by-election, which was held following the death of sitting MP John MacDougall.

‘Many challenges’
In a report on the administration of the by-election, the Electoral Commission said it was run well by Fife Council in difficult circumstances.
But the commission report stated: “We do have some concerns that the count was not as transparent as it could have been, due to the layout of tables in the hall.
“One table where votes were being counted was not clearly within the view of candidates, agents or other observers.

“Also, the central tables where the votes for each candidate were collated were situated behind the returning officer’s platform and obscured from view.”
The report also said the first opening of returned postal votes did not take place until the day before polling day.

Had this been done sooner, the commission said, a problem which arose with the electronic scanning equipment used to help adjudicate postal votes could have been resolved more quickly.

“The timing of the postal vote openings and the potential consequences of that timetable gave us cause for concern,” stated the report.

To think that Britain, the mother of modern democracy, has been brought to this state. If Brown wasn’t such a hard-hearted selfish bully, he would feel ashamed of what he has done. The trouble is, he intends to do exactly the same again, and rig seats in the General Election.

The penalty for defrauding elections should be the maximum allowed by the law. Brown is a traitor to his country, and should be impeached.

Report on the missing records from Glenrothes HERE.

In December the SNP in Glenrothes applied to the sheriff court to obtain a copy of the marked electoral register—on which officials in polling stations score out voters as they register to vote. It is the official record of who presented themselves to vote.

Candidates and their agents are allowed to see a copy of the register, which records only who voted and not how they voted.

However, after repeated requests for the document last month, Councillor John Beare, the convener of the SNP Central Fife constituency, has been told that it has gone missing.

Mr Beare said he was told renovation work has been carried out at Kirkcaldy Sheriff Court and that some documentation had been removed for confidential waste disposal.

Under the present electoral arrangements, certain papers including voting papers and a copy of the marked electoral register are to be kept by the sheriff clerk for that electoral area for a year after an election.

Asked if she suspected foul play, she said, “ No I do not. Nor do I believe it was a fair election.

“All I can say for sure is that the crucial information that proves it one way or another has gone missing.

We await the Glasgow East report with baited breath. Dale twittered his mistake to me five minutes after me posting this.