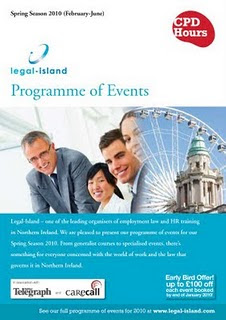 lawyers – the people who get happy while making trouble in the workplace, while businesses are left leaderless, as a result.

I started my business in 1977. It was a very worrying time, and exciting at the same time. Days could be spent in the slough of despond with no orders, or customers not paying, or in ecstasy if a big order was won or paid for. It was a father and son affair at the start, but as orders grew and became more consistent we employed staff.

Sometimes an appointment was successful, and the person appointed exceeded expectations, but occasionally a person was unable to achieve speeds or quality, and there was unfortunately no way to keep them on. In those days such a decision was made at the discretion of the employer. I would explain to someone if they were not cutting the mustard, and that a faster speed was required, or whatever the complaint was, and that if after training, they could not do what was required, they left.

Take the situation today. In many workplaces there are people wilfully not working, well aware that it is extremely hard to dismiss staff, and many bosses are tiptoing around them, reluctant to get involved.

In most workplaces today, someone has turned round and sued the bosses once they are dismissed, maybe for unfair dismissal, or even constructive dismissal when they haven’t been dismissed. They can raise any number of accusations for things like bullying, discrimination and a host of other things. They will find they can get legal aid, a barrister and expect to win a settlement.

The effects are mostly all negative. The person suing the employers gets a reputation,usually for telling lies, as most cases in courts are brought with a whole number of these being told by the claimants. They often end up leaving the area where they live, especially if it is a small community as they find their former friends turn away from them. They also might find it harder to find a new job, as word gets around employers one way or another, that the individual who brought the case has made a few insupportable statements.

Another very serious effect is that younger people who might previously been happy to get a promotion are nowadays most reluctant to take on any position that involves handling staff. Many businesses have to shrink, or close purely because they cannot get any one willing to manage staff any more.

The net effect on employers is that they reduce their numbers of staff and stop investing in job creation.

Only in jobs where people can be trained in a short time, is it viable to take on the lawyers, jobs such as supermarket check-outs, hamburger flippers, call centre operatives and so on. Only where the work can be simply specified and performance simply measured, is it legally safe to employ and therefore occasionally fire staff. In a manufacturing or more technical environment, defining failure is much harder, and it is unlikely to be understandable to the non-technical people who sit on Industrial Tribunals, who are usually more politically inclined.

It is easy for a cunning employee to always have a plausible excuse as to why they are spending time chatting to other operatives, not starting their equipment working and so on. And such a type will have no hesitation running straight to a lawyer if they were fired for a general charge of ‘not helping out’ others who are stretched, or not telling people what’s going on when it might have been helpful. Dissatisfaction can be hard to prove to a sceptical Industrial Tribunal luvvie, but only too easy for everyone who actually works with the perpetrator to fathom.

I have seen thieves who’ve got away with stealing from their employers rewarded with big payouts even when records have been clearly falsified. What does this all do to the morale of fellow workers who have seen them buy a bigger house or take expensive holidays, funded through crime, and then they get a reward from an Industrial Tribunal as an extra bonus?

Maybe Britain doesn’t want any more manufacturing to be done at home.

It is much easier just to flip hamburgers, work in supermarkets and live on social security. But if anyone would like the country to make a few things requiring skills that take years to accumulate, longterm investment and dedication, there is just one little matter that needs tidying up first.

Industrial Tribunals which create no advantage and only trouble for our society will have to all be closed. Managers will have to be given back their authority in the workplace.

UPDATE – The USA has over 10% unemployment, and it’s getting worse. See HERE. It’s time to get lawyers out of the workplace if people want jobs. This is the simple question people need to be asked – do you want employers or lawyers looking after you? You cannot have both.