The final words of the novel Animal Farm, written by Eric Arthur Blair, published in 1945.

PICTURE – Prime Minister Brown and Taoiseach Cowen at yesterday’s Anglo-Irish summit, the two men guilty of ramming the Lisbon Treaty down the throats of their once free peoples, the British and The Irish.

Cowen’s nickname is Biffo. Brown is too pompous to have one. 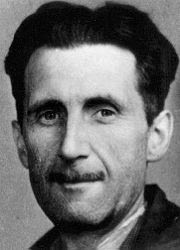 Political language — and with variations this is true of all political parties, from Conservatives to Anarchists — is designed to make lies sound truthful, and murder respectable, and to give an appearance of solidity to pure wind.

One Response to “Who’s Who?”