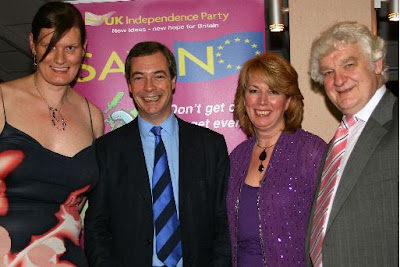 Nikki Sinclaire MEP UKIP West Midlands has fallen out with UKIP over the Party’s membership and leadership of the Freedom & Democracy Group in the European Parliament.

In her resignation letter, she said:

I have found it increasingly difficult to justify sitting alongside one or two of the European parties within the Europe of Freedom and Democracy Group who have a variety of extremist views which includes anti-Semitism, violence and the espousal of a single European policy on immigration.

If NIkki is right, UKIP are members and leaders of a grouping that campaigns for a Europe-wide policy on immigration.

A Party that stands for British withdrawal should not have any EU-federalist policies, but UKIP does.

Here is more evidence that UKIP’s change of emphasis onto an anti-Islamist platform, implies a reduction in the UK-EU withdrawal platform, to the extent that in the EP,UKIP is openly federalist.

They should be rebadged ‘EUKIP’. It would be more honest.

EUKIP even has openly federalist MEPs, for example Marta Andreasen, the resigned Party Treasury, MEP South East, alongside Farage. Farage knew she was a federalist when he recruited her.

EARLIER – Farage poses with West Midlands UKIP lead candidates for the Euro elections. EUKIP made history winning two seats in the West Midlands, while Labour and Conservative only managed 1 each. But since then disillusion has set in for Nikki Sinclaire.

2 Responses to “UKIP Or EUKIP?”