I looked again at the figures contained in the November 2009 Pre Budget Report, which covers spending and borrowing for the financial year 2009/2010, and the HM Treasury December Spending Outturn Report 2009. Doing this has exactly the same effect as continuously going back to view great works of art. Each time I look at the Government’s financial statistics, I see something new.

We know that government income as at April 2009 was GBP 496 billion, down from GBP 606 billion at April 2008. I’ve quoted the BDO Accountants Press section on their website as my immediate source for this information, although the same information is available in many other locations.

The problem is to establish what exactly has happened to revenues since then, as strictly speaking you have to wait for the Budget to hear the figures of revenue, which would be April 2010.

But wait a minute.

If you know the figures being projected for spending and borrowing, you also know the projected revenues, as they are pretty obviously the spend less the borrowing required, and as these first two pieces of information are given in the HM Treasury Report and the PBR, the third item is also easily worked out.

In other posts I have raised issues with how accurate the figures given may or may not be. But those points are not relevant to this sum.

What Darling said in his PBR in November 2009 is that he believes his borrowing target of GBP 178 billion at April 2010 will be met, and that the spending target of GBP 620 billion will also be met (Correction – The Spending total (TME) was in fact from the HM Treasury December Report). These two pieces of information are all that is needed to get his targeted revenues up to April 2010.

By deducting the borrowing requirement from the spending figure, we are inevitably left with projected revenue, or expected income.

UPDATE – As Gareth points out in the comments below, the spending figure of GBP 620c billion is not from the PBR in November. It comes from the HM Treasury Spending Outturn Report in December. They are surprisingly very different figures only one month apart. I had just assumed they would be the same or thereabouts and did not check them against each other. So my workings are initially not as solid as I hoped. But the new information raised by gareth provides yet further evidence of potential chicanery.

The PBR on page 12 gives the figure – GBP 678 billion – for TME. I’m leaving my ‘errors’ in my text, and explain why I see the HM Treasury figures as the ones to work from in my response to Gareth in comments below. The sense in my arguments is no different, and the results of the sums little changed. Revenues were forecast at GBP 498 billion in the PBR, but the spending adjustment in the Treasury figures throws them into doubt to the tune of GBP 60 billion, as at December 2009.)

The forecast of revenues at GBP 440 billion is made up of two parts however. First Darling totted up the known revenue position to end of October, and then he estimated what will happen from the end of October til April 2010. The first half of his sum is the actual figures for the seven months, and then comes his projection for the final five months of the financial year.

It seems from the political comments made, especially by Osborne, that the fall of revenues towards GBP 440 billion had already substantially taken place by the time of the PBR, and only if revenues recover in the New Year back to 2009 parity will the GBP 440 billion figure actually be achieved.

The 440 billion figure is based on optimistic assumptions as to the recovery of the economy.

If instead of a growth recovery the recession becomes a double dipper, as many are saying it might become in 2010, the 440 billion income figure could, in the event, be nearer GBP 400 billion. It is after all only a forecast, but one that is more likely to be reviewed downwards than upwards. If the April figure for revenue is at the GBP 400 billion end of the scale, the government’s revenue would have fallen by more than one third in just two years.

We are now only three months away from the end of the financial year in April 2010.

We know that November showed a further GBP 5 billion deterioration from the year before, probably another 1% fall in revenue. In amongst all the government’s optimistic sounding announcements, the reality is that the situation in Britain’s financial position has never been bleaker, and we are still on a downwards trajectory. It would be a miracle if the revenue drop from April 2008 to April 2010 was less than 30%.

It could well be no less than GBP 200 billion per annum.

These are stunning figures, which the media are clearly being asked not to report or dwell upon, as there is no commentary made anywhere as I can find. Opposition politicians are all talking about debts being run up over the next five years to GBP 1 trillion. At this rate, the GBP 1 trillion debt figure could arrive a lot quicker than that.

HOW LOW CAN WE GO?

If the collapse in revenues was the whole story, it would be one thing. But in a recession, government spending is also rising. Darling’s projected borrowing requirement is almost exactly the equal of the decline in his projected revenues. He projects GBP 178 billion for borrowing, and he ‘expects’ GBP 166 billion per annum decline in tax revenues from those to April 2008.

As we know he has been making major injections of cash into troubled banks, and recessions are well known for spiking spending on unemployment and other problems, the figure he projects for his spending increase seems very low.

I delved into what the GBP 185 billion of accounting ‘adjustments’ in the PBR account might consist of, in the previous post, and also mentioned the as yet unaccounted-for or provided-for potential liabilities from the toxic assets of the banks that now belong to the UK Government. In trying to build a full overall picture of where Darling and Brown truly are with their finances, these not insignificant matters should also be brought in to the account.

The 30% (GBP 200 billion per annum) collapse in government revenues might only be the half of the trouble. There might be an equivalent amount being spent in saving the banks, in a single year, but the accounting methods being employed by The Treasury are obscure.

You get the feeling that at some point the real story of collapsing revenue combined with sky-rocketing spending will have to come spilling out, maybe to the tune of GBP 350 billion in a single year – over 25% of GDP, not the 12.5% being claimed.

This cartoon from Jeffrey Hill is nearer the mark than anything you can currently read on the financial pages! This is a case of the cartoonists getting to the truth well before the bean counters let on. 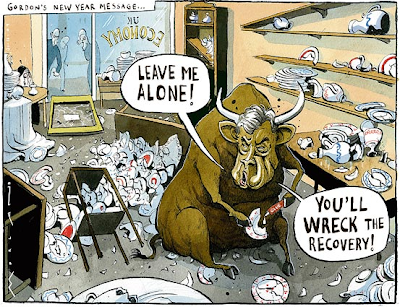 By Jeffrey Hill (via Guido)

Peter Oborne writes in The Daily Mail as follows –

Consider these bleak statistics: it took more than 300 years, from the foundation of the Bank of England in 1694, for the British national debt to reach the figure of £350 billion at the start of the millennium.

During the last decade alone, it has doubled to £700 billion. And, according to official Treasury figures, it will double again to around £1.4 billion in the five years to 2014.

Not surprisingly, there are grave doubts whether Britain can pay these rapidly mounting debts.

Already, the Government has resorted, for the first time since World War II, to the short-term and dangerous expedient of printing money.

It looks increasingly likely that at some time in the next 12 months, international ratings agencies will downgrade British government bonds, opening the way to soaring interest rates and a profound financial crisis.

My point, Peter, is that it will likely double to GBP 1.4 trillion not in five years but in two or three. We will hit GBP 1 trillion within a year. Something must be done.

The Telegraph says that Britain’s debt is less regarded now than Italy’s.