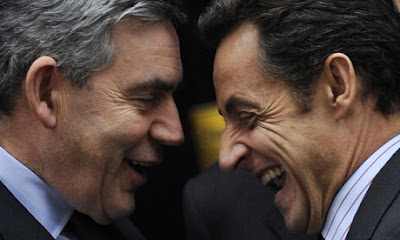 The financial goings-on in London, that I recently have been trying to follow by reading Treasury monthly reports, are just as curious as the political goings-on. The one thing that is in common between both is that the cabinet and the government are powerless to control events, and seemingly are of little or no influence.

For example, it could be not be clearer on the political front that the cabinet no longer wishes to work with Gordon Brown. MPs have lost faith in him, as have the public. And yet no one and nothing has been able to lay a finger on him, despite four separate attempts at a coup d’etat.

Every time they try to dump him, the BBC rallies to his defence, along with news media such as The Daily Mail. He laughs, ignores them all and carries on.

The finances are equally bizarre. The government admits that, in one year, it is raising a sum of £400 billion from ‘printing new money’ and from gilt sales, at a time when the GDP is only £1.26 trillion, about one third of GDP. And yet the government was until recently happily congratulating itself on heading towards the election with a programme to increase spending.

The £ has not fallen. Interest rates are stable. How can the government ignore financial reality, and get away with it so easily?

Markets are clearly not looking to the strength or wisdom of Britain’s government, or even its actions, to decide whether or not the country is creditworthy. With the economic just as with the political situation, the government and the cabinet do not appear to be the key players controlling events.

So what has changed?

One thing that has changed is the World’s Monetary System. After WW2, the $ was set up as the world’s international reserve currency at Bretton Woods. For fifty years the $ was the only reserve currency, and remained so throughout the post-war period. But now there has been an agreement made by the world’s central banks, based on the Bank Of International Settlements, a private bank in Switzerland, that the dollar is to be gradually replaced. The new international reserve currency is to be the IMF Special Drawing Right (SDR) which is to be made up of a basket of currencies.

It is stated that after the financial crisis there could be added to that an element of gold. Obviously the plan is still to absorb Sterling into the Euro. So this might be the final look of the world’s new reserve currency.

Given that Sterling has become by stealth without anyone being told, effectively a world reserve currency during Gordon Brown’s tenure, that could explain why Brown and Balls can laugh at the collapsing banks and collapsing government finances, and those who believe that Britain still owns and is responsible for its own currency. The British part of Sterling has become the smaller part of it.

As a world reserve currency which all the world must hold, the currency’s value is underwritten. But the plan undoubtedly will be to force Sterling into the Euro in time.

But note something else, the world’s financial system, as I said is run by the BIS in Switzerland. This is a privately owned bank. Such an entity will be very happy for the UK to get itself into massive debt, so that we can be toyed with, and, in the midst of a financial crisis, our assets can be acquired for a song.

The problem seems to be that as monetary power, and regulatory (law-making) power slips away from the nations, so too does political power. Brown has aligned himself with these international forces, as did Blair. We are going to pay a heavy price, if the world is allowed to set up these international entities that toy with us like puppets, and corrupt our leaders.

Cameron, Hannan and Carswell and others are talking of building a society based on local decision-taking. They will be facing powerful forces ranged against them. But at least Brown and Blair are now so discredited that even with the all the advantages of playing the games of the new world network, they have crashed and will burn.

By my estimation, they should be burned a lot more yet.

The journalist in the video below is the source of much of my growing knowledge about these events. She says the world pooled together all military intelligence in 2001, which explains how the Iraq War came to be imposed on Britain, despite so much opposition, and it is why David Kelly was murdered by foreign agents and yet British security did nothing except cover up.

I have watched six of the videos of Joan Veon talking below. If you are interested, you can learn a lot by listening to Joan Veon, although her angle is US based, not UK. The message however applies to all of us. It is chilling. But better faced up to, understood and dealt with.

I hope some of you click on to her and listen. She has followed this developing story a long time.