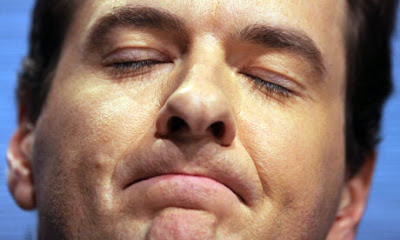 From The Telegraph – The Prime Minister said the Government was taking the “difficult decisions” needed to halve the £178 billion deficit, decisions the Tories refused to take. He said Conservative plans to cut the deficit more quickly would only serve to keep Britain in recession for longer.

Now I don’t expect Gordon Brown to be entirely logical in all his statements, especially those about a topic he is known to find impossible to be honest about – the topic of money. But the above sentence from The Telegraph (via CH) leaves itself well short of even an attempt at normal logic.

Maybe someone else can fathom these arguments.

George Osborne says that even The Treasury figures show that Brown is making cuts. He obviously has been looking at the December 2009 Spending Outturn Report, and finding as we have done, that the total of spendng (TME) is inexplicably GBP 60 billion less than in the Pre Budget Report issued only a month before.

But George, you must have seen the GBP 185 billion of unexplained accounting adjustments in the Treasury Report. I would hesitate before interpreting these as spending cuts. To my eye, these are first of all, a device being used to hide the embarrassment of falling revenues.

Only by ‘adjusting’ the spending figures downwards in parallel, can the politically all-important borrowing figure be held constant, with revenues tumbling.

I regret that George is trying to see some kind of reality, or sense in the fantasy accounts being thrust on HM Treasury paper in front of our eyes. I am convinced that these figures are mere manipulation, and not deserving of any serious commentary.

I can see George’s problem, though. Only on blogs can we say what is really going on. How can The Shadow Chancellor say in public that Brown is lying and fabricating information?

It reminds me of the saying – that (paraphrase) against a well constructed argument from an intelligent source I can produce a solid counter-argument. But up against total stupidity I am powerless.

Keep trying, George. You have no choice.