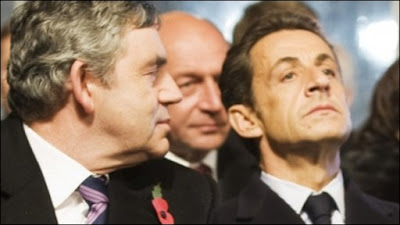 All the talk tonight is about David Miliband. Did he bottle the leadership opportunity, presented by the Snow Rebellion? That is the opinion of both the friends and the enemies of Gordon Brown, who are both angry with Miliband, for different reasons.

But the process of attacking and removing Brown requires permission. Miliband could not move alone. He needed to know he would be granted full media support and the tacit agreement of the established network within government.

Miliband was willing to jump no doubt, but he had not received his instructions. These would have to come from Mandelson, and, above him and far more importantly, the EU, before he would make a move on Brown.

Labour Party leaders are appointed, effectively with permission from the EU, and the EU has already decided to leave Brown in place until after the election. They had sent Mandelson back to Blighty to carry out the task of protecting Brown up to the election, and they would not understand it if their appointed folks then went and dismissed their current safe pair of hands Prime Minister.

From the Brussels viewpoint, why would they want Brown dismissed? And from Madelson’s, he’s quite enjoying the job of ‘mentoring’ Brown, and ‘protecting’ him, acting as an eminence grise, managing events for the EU up to the election and beyond, and brokering power between Brussels and London.

Miliband has spent years building position in Brussels. He would not want to jeopardise that by moving on the leadership without permission from the ‘Masters Of The Universe’. They like Gordon Brown who is loyal to Lisbon, and would not forgive Miliband for attacking him and unseating him, without their first agreeing to it.

Miliband will still, no doubt, be appointed when the Masters are ready.

Behind this decision they fear Cameron and his open opposition to the terms of the Lisbon Treaty. They imagined him the next Blair, who would sell out for ‘position’. Since his post-Lisbon speech, Cameron has received far less support from the media, and has been squeezed in a series of opinion polls. The decision has been taken to manipulate the vote and create a Hung parliament, and neutralise David Cameron that way.

All is nicely set, and the EU do not want to risk a change of leader when they have the game nicely sown up. If they have a concern, it will be Brown, not Miliband, who would lick their boots as assuredly as Blair. Miliband bottled nothing.

Those with the power to unseat Brown, and who ultimately control Miliband, however did bottle. Maybe they too fear the revenge of the Gord, or, more likely they feel so grateful for his selling out on all fronts, that they refuse to knife him now in his hour of need. Bureaucracy doesn’t work that way. It rewards its friends, ánd does not take risks.

From Andrew Grice in The Independent, who noted that in some way Mandelson has been strengthened by the failed Snow rebellion –

It is easy to mock the plotters. By the end of the week, the rebels were even mocking themselves. One admitted: “It was a bit like an African coup. We seized control of the radio station and made a broadcast but we weren’t sure which way the army would be facing when we came out.”

I could not have put it better myself. The power to decide rests outside the ranks of elected representatives. But while admitting that Parliament and Ministers are emasculated, neither Andrew Grice or anybody else wants to square the circle and say where real power actually resides. See his article in full HERE.

The EU likes the Labour Party, but for them its leadership is not the biggest issue, just as long as they get their way. That’s all they care about. As long as Brown tows the line, he will be kept in place. Now it seems, he’s getting the message, and is altering his ideas. Britain’s surge into fiscal oblivion is at least going to be delayed a little longer.