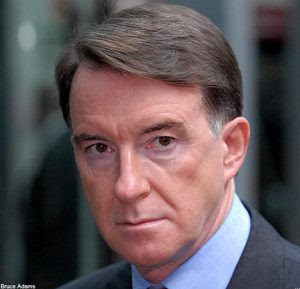 In The Herald Scotland, yesterday, Mandelson is quoted as saying the election will be called within a week.

…Later, Lord M went before the television cameras and, surprise surprise, was not asked about the growth plan but the failed coup. He coolly described it as “a small day of minor madness”.

He also said that the PM would launch the General Election “later this week”. Does Gordy know? Does the Queen?

When the slip was pointed out, the first peer’s eyes widened. “What like tomorrow? Isn’t it funny the things you say?” he noted. You heard it here first.

He also seemed to be choosing his words carefully during a BBC interview as if he knew something.

The WSJ story about Darling going to see Brown could be another clue. Have they had enough of the waiting and the plotting? The finances are in crisis, and could get worse. Brown looks exhausted. Maybe now would be a good a time to go as any, while the polls are still respectable.

Or was Mandelson merely trying to create a diversion from The Snow Rebellion?

Probably, but you never know with Mandelson. His words can mean anything you like.

The plotting and open rebelliousness of Labour MPs might not only be to do with changing leaders. If a major banking crisis is coming, rising interest rates, government cuts and a falling pound, Labour would do well to quit the scene and let the Conservatives win a poison pill election.

Some commentators are talking of Labour working a financial scorched earth policy to land the Conservatives in a financial nightmare, punishing them endlessly from opposition for the appalling state of the finances, which they created, and then win back power after it’s all blown over.

With the heat in the kitchen turning to fire, opposition might be starting to seem the more attractive option. They don’t just want Gordon out. They all want out. No wonder Mandelson and the rebels are all toying around with the situation like a kind of game. The pain threshold is rising too high and they don’t care any more. Their pensions are secure. It’s a situation which needs someone to pull the plug. For the country too, the relief will be immense.

Come on. Call that election.

Post Mortem on the Snow Rebellion showing role of Harman HERE. More endless speculation – will it be Miliband, Harman and so on? Why not just get on with it?

Election first. Labour leadership second. Then we can all move on from this endless political rut going nowhere.