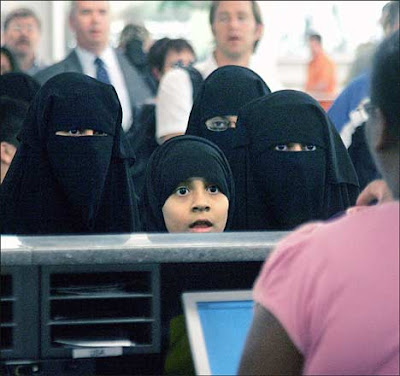 Dear old Malcolm Lord Pearson, leader of UKIP, is none too bright. He decides to attack the Burka, which is not much of a problem in Britain as I can see. Outside of Central London, where are these hordes of burka wearers? There might be ten or twenty of them in Harrods one or two days a week, spending lots of oil money. London is an international city, which should not be raising barriers to wealthy visitors. I cannot see that in Britain generally this issue has much relevance.

Pearson’s problem is to maintain visibility in an election in which most voters are simply desperate to get rid of the government, and his little Dad’s Army are in danger of being marginalised by the big parties. On the other side, UKIP are being eaten into by the BNP, where IQ tests are not required as part of the membership qualifications. Pearson also wants a share of the dumbed down action coming from that angle.

But in trying to grab a headline, he has only raised one issue in the minds of voters. 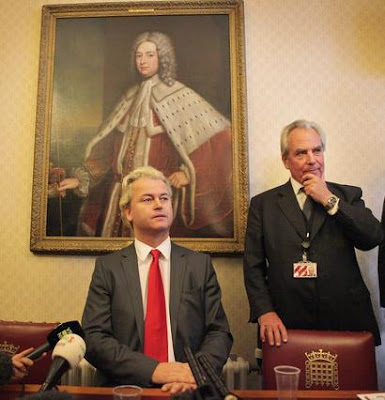 Lord Pearson brings Wilders to the House Of Lords to be interviewed. He seems more interested in creating a party to fight Islamism than to get Britain out of the EU.

What is UKIP for?

The answer should be that UKIP exists to ensure that Britain leaves the EU. In featuring marginal issues such as burka-wearing, the primary message of the party is getting clouded.

Nothing is more certain to ensure Britain doesn’t get out of the EU, than Pearson’s other new policy declaration, the intended blocking of eurosceptic Conservative MPs from Westminster. Now Malcolm’s stating that even the most ardent Conservative eurosceptics will face UKIP competition for votes at the GE. What exactly is the point in that, and how does it help Britain get out of the EU? Pearson’s answers to this don’t make any sense.

UKIP is not an insignificant party. In particular its success in the European EP elections, in which the party came second winning 2.4 million votes, or 16.5%, pushing Labour into third place, has had the effect of crushing all talk of proportional representation in Britain. For that Britain must be eternally grateful to the party. A combined vote of UKIP and Conservative under PR would be near enough an outright majority, while Labour and Lib Dem together would be 10% short. PR was undoubtedly part of the EU’s strategy to keep Britain snarled up in red tape, if the Conservatives started to win elections. UKIP’s strength in EP elections, much of it due to Nigel Farage’s skill as a communicator, has buried that threat for good, it seems.

This strength has been built by sticking to the knitting – working for a UK exit from Europe.

In terms of actually getting Britain out of Europe, nothing is more calculated to keep us stuck in place than UKIP’s current strategy for the general election. Led by Malcolm Pearson who seems to have no idea what his primary objectives are and how he is going to achieve them, the party is starting to look small-minded, chippy, in a phrase, none too bright.

Pearson can’t see the big picture, so he runs and hides in the little details. It’s exactly what British politics doesn’t need – another small mind with no vision. We need leading out of the mess we are in. Pearson knows how to get angry and strike out at illogical targets like burkas and eurosceptic Conservative MPs, but that is about it. We don’t need another angry little man, rather pleased with himself at achieving a little position, who cannot keep his eye on the ball. We want someone who can raise our game.

The only serious chance UKIP might have at the GE is to get Farage elected to Buckingham against John Bercow. If the focus was on this one seat, and getting the first UKIP MP elected to Westminster, that would be a worthwhile objective. But UKIP is now looking lost, delving into the realms of stupidity, keeping good eurosceptics out of seats for no reason other than a desire to be seen as important by Lord Pearson. There’s no point in electing Farage when he’s part of such a stupid party. Pearson has raised the risk of damage to the eurosceptic cause, without achieving any advantage.

It’s a shame Farage cannot be elected as an independent. He has enough personal kudos to be elected without needing the UKIP badge. For Conservative voters who would support Farage, but who are worried about letting loose a party looking as if it will slide into a culturist racist quagmire at any second, an independent Farage might be a more attactive proposition. Britain needs a lion like Farage in the Commons. It doesn’t need a party like UKIP, adrift in the political ocean without a compass.

11 Responses to “A Lion Led By A Donkey”