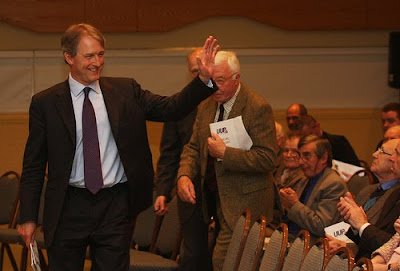 The rumour mill in Ireland says that Owen Paterson’s meeting at the weekend between the DUP and the UUP included an item on the agenda proposing a Tory-DUP-UUP alliance for the coming general election. This rumour has been publicised on RTE but nowhere on the mainland.

The Hung Parliament prospects in the coming election are maybe weakening Conservative resolve in negotiations, and enabling concessions to be given so as many seats as possible are won, backing David Cameron. If some opinion polls are to be believed, his majority could be very thin, and the winning of seats in NI could be crucial.

The rumour would make sense from that point of view.

Within NI, a DUP-UUP alliance would block Sinn Fein from becoming the leading party of a devolved government.

From RTE – Such a merger would be difficult for the two organisations but it would allow unionists block the possibility of Sinn Féin being returned as the largest single party and in line for the post of First Minister.

3 Responses to “Is Owen Paterson Proposing A Major New Alliance?”