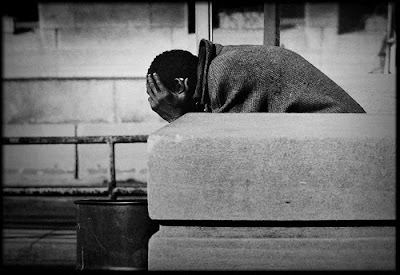 There’s something really odd going on. We know all the bad news about money. Some of us have our suspicions that things are actually worse than we are being told, and that the government’s reports contain bizarre accounting methodologies that suggest subterfuge.

The failure of the government to deal convincingly with the deficit is one thing. But so too is the ludicrous attendant politicking about who will spend the most on what. It all has a weird feeling of unreality. It’s as if there is a societal failure from all involved to realise where they are on the map, to take it in how potentially serious a situation we are in.

The same unreality is to be found in estimates as to the possibility of the government winning the election from 10% behind in the polls. The government is issuing media opinions that the election can be won by Liberal Democrats and Others moving back to support Labour. But the opinion from election experts is that this is not very likely. Yet we are so used to false information and ludicrous assessments that no one as much as bats an eyelid, when we come across yet another example.

The Snow rebellion by Hoon and Hewitt was so hopelessly initiated, and carried through, as if it was taking place inside another bubble of unreality about what was possible or likely to be achievable. The whole carry-on of having a political leader who won’t lead is painful to observe, and yet not one of them will do anything calculated to sort the situation out.

Just two weeks previously the whole world assembled in Copenhagen to attempt an agreement from every country that climate objectives could be agreed on and set, and yet the most basic understanding of the science seems to be flawed, and has not been properly assessed. Yet still no one wants to bring this to general attention. It seems easier to carry on with the confusion.

What is going on? Normally the world has the occasional thing that goes wrong but most of the time people are able to grasp the reality of the situation they are in. But right now, starting right from the top in Britain in the Downing Street bunker, and extending outwards from there into the media and to other countries, there seems a disconnect between what is possible to be achieved and peoples’ aspirations and beliefs.

I cannot remember a time like it when nothing added up, whether that be accountancy, science, political strategy or simple economic management. Britain, for example, has little gas left, about 8 days supply in the middle of winter. Councils don’t have any grit or salt to make the roads safe, or at least no reserves.

It’s as if every day another impossible dream and another unreality is faced with its inevitable outcome. Failure has become the norm for everything. Functionality has somehow become impossible in a thick fog of inaccurate information, produced to facilitate the dreams of the fantasists, who believe that they can reduce all eventualities to meet the outcomes they desire. It’s a kind of global insanity that has descended, where peoples’ minds have become rotted, unable to deliver the simplest result, or carry out the simplest functions.

Somehow this whole shambolic scene must be reduced back to reality, as, apart from anything else, it is getting dangerous. What is causing this global float into financial, political, social and economic hopelessness? The parts of the human mind that are capable of making good managerial decisions have been frozen over, and suppressed. The world seems poised on the edge of a cliff, almost willing itself to fall over. How many more hopelessness can we tolerate? How many lies? Not much, I fear.

And when, we wonder, will some kind of reality force itself through the enveloping fog, seize us by our throats, and force us to become effective once more at completing the simple tasks that we are easily capable of, such as buying grit, or arranging enough reserves to ensure we survive the winter. Is the informational fog a fog of fear, suppressing the collective mind, or the fog of lies, where for too long people with secret programmes have been allowed to get away with terrible crimes against ordinary people, where trust has been so badly abused that it no longer exists?

The fundamental values are soon going to tested, trust, belief, confidence and determination. Are we going to accept living in a world of terminal hopelessness? Or will someone please bring this awfulness to a conclusion, and let us make a fresh start? Could we please be put out of our misery? Couldn’t someone call an election, allow popular sentiment to rule once more over the arrogance of media-centric politicians. We must not allow our souls to be crushed, as that will come next if we let it. Humans have to get back into control of the awful machinery of deception that has been created.

Only in the silence of our own thoughts can we find any resonance that tells us to demand our right not to be abused with continual unreality that is being inflicted on our minds. The fight of good against evil must be fought and it must be won.

And the endemic hopelessness, and the extraction of the true values from everything we see and touch, as is being forced on us, is as big an evil as could be imagined.

UPDATE – Reality will arrive eventually, but why does it have to be like THIS?