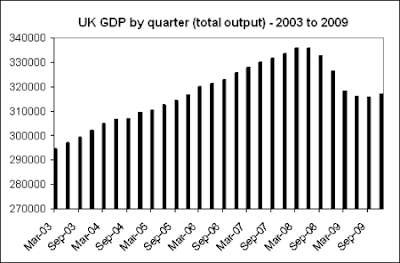 In the governments figures released today, there is no attempt to create a realistic version of the figure for GDP. GDP is being taken at the figure of £1.41 trillion. You can work this out for yourself, as the December total government borrowing figure of £740.6 billion is expressed as being 52.5% of GDP.

The last two quarters’ GDP figure is £630 billion (July to December), which suggests a GDP figure quite a bit lower than the £1.41 trillion. It might be acceptable to use the full year’s GDP for 2009, as from the above chart. Using £1.41 trillion is deceptive. It is arrived at by the creation of a stunningly optimistic forecast, it appears.

This is the ‘explanation’ as to why a wrong figure is being used for GDP in the government’s blurb.

The figures for GDP in the six months to December are known. £630 billion. The GDP for the next 6 months would need to be £780 billion to get to a figure of £1.41 trillion. Is that likely? A burst of growth of 24%! Pigs might fly first.

This estimation procedure is explained in detail in an article, The use of GDP in fiscal ratio statistics, available at www.statistics.gov.uk/psa. As a result of this estimation procedure the debt ratio is provisional when first published and subject to later revision when outturn GDP first becomes available, and again when more refined estimates of GDP are published..

So in the meantime we publish a figure which cannot possibly be correct, and which conveniently massages the government’s statistics.

The borrowing figure given does not include monies used for financial rescues. If that is included, government borrowing is £130 billion higher at £870 billion, that is 69% of GDP of £1.26 trillion.

I borrowed the chart at the top from The Spectator’s website. If you add up the four quarters of GDP of calendar year 2009, you get a figure of £1.27 trillion. Why is the government adding 10% to the real GDP figure is the question?

I have to admit. I’m baffled.

I cannot believe it is entirely simple deception. The GDP in 2008 was given as £1.48 trillion, and yet from The Spectator’s chart, it appears to be £1.35 trillion or thereabouts. Has the government always exaggerated GDP figures in the past by 10% as a matter of course?

What are these magical adjustments being spoken of which convert quarterly figures into much higher annual figures?

Maybe someone can explain what is going on here. I’d be very grateful!

I called Andrew Lilico at Policy Exchange and he kindly explained that GDP figures quarterly are given at 2005 prices. The adjustment is therefore to add inflation of money since then to get the real GDP figure.

I would like to thank Andrew for putting me out of my misery, and apologise for getting my figures wrong – again!!!

You would think the government might put such a simple explanation in its documentation so that ordinary proles like me can understand what the figures mean. At least I don’t need to lose any more sleep imagining we are being cheated with wrong information as to GDP.

However, I am sure we are being given some overly optimistic figures by the government regarding its spending and revenues in the PBR. The figures released today indicate that government revenues fell by 29.5 billion on 2008, in the April to December 2009 period, yet Darling claimed in the PBR that his borrowing target was on track.

At this rate Government revenues will probably be about £455 billion, down from £606 billion to April 2008, a fall of 25% over two years, taking the borrowing figure higher in theory by another £50 billion, compared to the PBR forecast, which assumed revenues were on track.