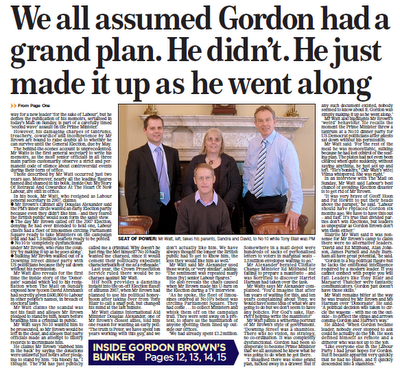 The Peter Watt revelations being serialised in The Mail are spinning out into all other media instantly. The BBC are running the story on the news, and most newspapers. Brown is already weakened from the Snow Rebellion. He needs to rebuild his position quickly, to re-establish a semblance of authority. But now this.

His reputation will be besmirched to such an extent that he will be unable to project authority. HE is extraordinarily able to twist and turn and appear as if he’s not touched by events, but with the whole Labour Party now spitting him out in public, it can only be a matter of time.

Brown has one last defensive ploy he can pull, and that is to all an election. Otherwise two more weeks of this and he will surely be gone.

FROM THE WATTS REVELATIONS –

“Later I discovered that an attempt had been made to falsify minutes of the brief meeting I attended in Victoria Street, with Dianne, Harriet and other NEC officers before my resignation.

The document misleadingly suggested that I had admitted wrongdoing. One of those who was present at the meeting saw the account, which was written retrospectively, and demanded that it was corrected before being sent to the police.

It was clear No10 badly wanted me charged.”

and “In spring 2009, the Crown Prosecution Service confirmed there would be no charges.
During a teleconference between Labour Party HQ and No10, one party official declared to another: ‘Bad news. They’re not going to charge Peter. It would have been better for Gordon if he had been.’”

Brown is being revealed as a criminal,not merely an incompetent. The pressures are building so strongly, they won’t be able to put back any more. The Labour Party is a machine built on loyalty to the Party at all costs, but Brown has stretched that loyalty beyond breaking point. The inevitable will now surely occur.

Mandelson will be the key. If anyone can patch Brown up, and present him to the electorate it will be Mandelson. And if Mandelson decides the game is up and Gordon must go, then that is the moment he’s gone.

UPDATE – There is a more damaging story in the Times which reports that Brown refused Hoons call ( in 2003 )for money to be released to go towards the purchase of helicopters for our troops in Afghanistan.

If true Brown should resign now. To send troops into a war zone without giving them the tools to do the job is unforgiveable.