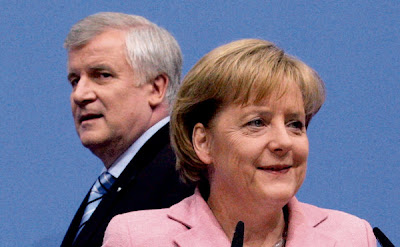 David Cameron’s EU policy announcement post-Lisbon has been received with equal portions of venom from both sides in the great divide of opinion over the EU. Inevitably with so much trouble on offer, Europe as a topic has disappeared from the political radar in Britain, while election battle positions are taken up. It is unlikely to reappear from this enforced hibernation until all is settled once more after June or whenever the election is called.

Meanwhile in Germany, where the Supreme Court has insisted that Lisbon in no way creates a sovereign state which can override Germany’s democratic decision-taking bodies, the CSU, the coalition partner of Merkel’s CDU in government, has decided that the German election period is sufficiently into the past for Europe to become once more any issue again over there.

It is very similar fighting talk to that started by Cameron in London in November, basically stating that the CSU like the Conservatives does not accept any loss of national sovereignty. A struggle between a very determined centralising EU and nations unwilling to accept their sovereignty has been lost, is an inevitable result of these positions. But at least Cameron is going to find an ally at the top table of German government.

Frankfurter Allgemeine Zeitung reports that the German CSU party, the Bavarian sister party of German Chancellor Angela Merkel’s Christian Democrats, will pledge to “limit the influence of Brussels on Germany” at its party conference on Wednesday. The newspaper has seen the party’s draft EU policy program which reads: “not every problem in Europe is a problem for Europe. All problems which can be solved by the member states should be solved there.” The policy paper also rejects a unified European social policy and the extension of EU discrimination regulations. In justice and home affairs, it argues that national policies must be given priority, warning that the European Commission should “not put into question national best practices”.

The document also warns the European Commission against pursuing the introduction of an EU-wide tax and states that, even if the Lisbon Treaty gives the EU new competences, “no additional resources should be made available”, arguing that increased spending should be financed by savings elsewhere. The text also calls for the EU to end its enlargement negotiations with Turkey.

It seems that Lisbon may have been passed after a nine long years battle in which all democratic opposition was crushed, but will now face fresh challenges from the Conservatives in Britain and from the CSU in Germany. The topic will not be going away.

One Response to “German CSU Backs A Cameron-Style EU Policy”