The knives are out at Westminster. The internal battles within Labour, the withdrawal into the bunker by the Brown hardcore, and the mass resignation of Labour MPs in marginal seats is sending out signals of a regime in terminal decline.

But woe betide any journalist inside the lobby who dares to as much as notice that Labour are basically fucked.

The Guardian, for example, persists with its Labour loyalty line to the political end, writing and talking endlessly about the Hung Parliament, making no concessions to Conservative poll leads. There are two parallel worlds, it seems, between journalists who want to build their reputations by calling the goings-on at Westminster, and those who know their business can be gravely damaged and that government advertising revenues might be withdrawn as a punishment,if they stray from the party line.

The Guardian’s own highly reputable editors even can be heard, off the record, complaining about the ridiculously tight controls placed on what they are allowed to say, but they dare not break them.

On the other hand, even the free-minded openly speaking intuitive individual Westminster correspondent can still be brought to heel by the Brown bunker. They still hold the reins of power and can find a way to hurt anyone it decides has not shown enough loyalty to the Fuhrer, if they want.

One individual bringing the rage of the Labour media machine, or what’s left of it, down on his head, is young Fraser Nelson, Editor of The Spectator, who clearly took the line in the Snow Rebellion that the game is up for Labour, and that there would be no possibility of a recovery from here. His greatest crime, of course, is being right, and telling the truth to the public. Doesn’t he realise that he is a mere apparatchik of the government’s media machine? Apparently not.

The revenge of the Labour Gestapo has been swift and deadly.

Fraser is banned from all Lobby briefings. Four journalists, including Fraser, were found not to have declared their up-to-date outside interests, and have been reprimanded and punished to some extent by the Parliamentary Standards Commissioner.

But only Fraser Nelson has been actually banned from the Lobby, his pass removed. The others were more mildly rebuked. We don’t know the full facts of the case, but it seems strange that the only confident voice declaring that Labour are, in his opinion, through, is the only one being chopped.

From Liberal Democrat Voice – Our Place To Talk –

The Parliamentary Commissioner for Standards, John Lyon, has ruled that Martin Bright, Melissa Kite, Andrew Neil and Fraser Nelson all broke Parliamentary rules by failing to fully declare their financial interests in the Register of Journalists’ Interests.

They have all been lobby journalists, giving them special access to Parliament and politicians. Given the possibility of lobbyists and interest groups paying members of the lobby to raise issues on their behalf, there is a financial register which – in theory – provides a degree of transparency and hence protection against abuse of the system. Parliament’s rules require lobby journalists to declare the sources of their income, where the income is based on their access to Parliament.

However, all four failed to enter accurate records on the register. It was not simply a matter of missing the 28 days deadline required, but the register has contained information that is out of date by months, and even in the cases of Andrew Neil and Fraser Nelson by years. As an updated version of the register is published each month, it should have been repeatedly obvious that the rules were not being followed.

Of the four, Fraser Nelson no longer has a lobby pass. The Standards Commissioner has decided that for the other three for the next year their entry on the register will be marked to show that it has been corrected following a complaint.

Petty, Mr Lyon. Very petty. And not good for democracy either.

It seems that truth will have a hard fight on its hands getting back into the driving seat at Westminster. Fraser Nelson has been one of the most courageous journalists for telling it like he sees it for all sides. Being axed by the government as it approaches its final descent to oblivion, is his apparent reward.

Fraser is just as willing to tell it like it is to Cameron as Brown. 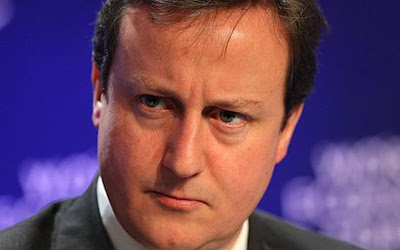 See this from The Telegraph in May where he picked up on Cameron’s change of approach in May 2009, referring to him as a ‘brute’.

David Cameron’s scowl is coming on nicely. For weeks, he has never left home without it. Whether stepping into his car or the television studio he has been careful to suppress his jovial instincts and instead project anger and determination.

Times have changed, and so we are witnessing a leader mid-mutation. The smiling Cameron’s role was to detoxify the Tory brand, and seduce wavering voters. The stern-faced Cameron must persuade people that he is a man with enough resolve and ruthlessness to save the country.

It has not taken him long to find his inner brute.

Take, for example, the four Tory MPs whose careers have been brought to a premature end over the expenses fiasco. When asked, Mr Cameron says – with just a hint of malice – that he had “a conversation” with them. It may not be long before others are treated to a similar chat.

It is all good practice. For if he is elected into office the Tory leader will be having “a conversation” with the Treasury about the implementation of radical spending cuts across education, policing and defence.

Not a bad call as it’s turned out. But Fraser should be careful. Being right too many times can be dangerous. He should have been watching his back.

The Spectator will no doubt get its news feeds some other way, until he can crawl his way back into favour with Downing Street.

Link and hattip to Lib Dem Voice, my source – HERE.

2 Responses to “Fraser Nelson Gets Chopped”