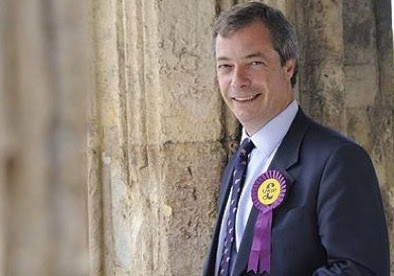 A quick look at Nigel Farage’s website for his Buckingham campaign tells me that, while they’ve got a couple of good ideas for their themes, they need a bit more work doing on them.

This is the text.

That sentence needs a bit more detail. Bercow always promised the people of Buckingham he would vote for a referendum on the Lisbon Treaty, but in the event he voted against one. This is surely a key fact, which needs drawing out.

NF could claim that the Conservatives MPs are unsure about their loyalty to Bercow, and his loyalty to them, and express it like this –

If they don’t even want him as Speaker, what’s the point in the people of Buckingham returning him to Westminster?

Buckingham constituency needs a Voice not a Speaker and UKIP’s Nigel Farage can be that Voice.

It’s a nice play on words, but without more, does it mean much to a voter trying to decide between these two options? There are surely hard issues that should added to the theme which position the voter.

Taking the Voice theme, which is a good idea, why not expand it –

The first Voice in Parliament from an withdrawalist MP with no restriction from any party whips.

A Voice against the Euro.

A Voice against the Lisbon Treaty

A Voice against the EU Superstate

A Voice which explains the true reasons why Britain is in such a mess.

He will stand against Speaker Bercow in Buckingham at the next general election.
This is your chance to be heard, simply tell Nigel what issues are of concern to you by emailing him at nigel.farage@europarl.europa.eu

That’s one way of doing it, asking for ideas, but really at this stage, if I was a Buckingham constituent, I would want a clear line on why I should vote for Farage, what he will do in Parliament, what the purpose is of putting him there, and why this will make a difference in result from putting Bercow back in.

(One good point about UKIP as an aside, is that Brown and Labour always imagined they could resort to PR as a way to block withdrawalist parties. Not any more. UKIP in the EP election drew 2.4 million votes and came second overall. UKIP and Conservative together could hold an overall majority under any PR system.

UKIP means that Labour will never go for PR. )

The theme, ‘ a Voice, not a Speaker’ could be strengthened further –

An essential Voice, which should be heard, not only on the fringes, in the EP and in the media, but in Parliament. Britain has no representation in Parliament for the survival of its independence.

As for the Speaker, Conservative MPs don’t want Bercow, so what’s the point in returning him.

That’s the limit of my suggestions this PM.

With more time, we can always do better. But for twenty minutes, there are a few ideas, Nigel!

For old times’ sake. It’s nine years since I last offered ideas for a Farage leaflet!

In every other seat in Britain, I’m a Conservative!

UPDATE – I was very disappointed to see NF drumming Nikki Sinclair out the UKIP delegation to the EP. The tone was ugly. Nikki is clearly unable to stomach the racism of the Northern League (and other values), and wants to focus on getting Britain out of the EU. Pearson is trying to BNP UKIP. It’s a big mistake. After seeing the Farage bullyboy stuff on NIkki Sinclaire and taking into account UKIP’s new focus on anti-Moslem politics, I no longer see Farage as a good idea in Westminster.

Surely these troubles could be handled more gently. Buckingham won’t want to know.